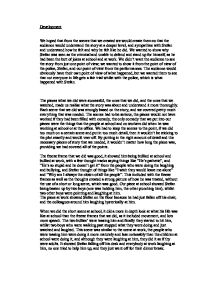 Development We hoped that from the scenes that we created we would create them so that the audience would understand the story at a deeper level, and sympathise with Stefan and understand how he felt and why he felt like he did. We wanted to show why Stefan was seen as the criminal and unable to defend and stand up for himself, as he had been the butt of jokes at school and at work. We didn't want the audience to see the story from just one point of view; we wanted to show it from the point of view of the police, Stefan, and our point of view from the performances. The audience would obviously have their own point of view of what happened, but we wanted them to see that not everyone in life gets a fair trial whilst with the police, which is what happened with Stefan. The pieces what we did were successful, the ones that we did, and the ones that we watched, made us realise what the story was about and understand it more thoroughly. Each scene that we did was strongly based on the story, and we covered pretty much everything that was needed. The scenes had to be serious, the pieces would not have worked if they had been filled with comedy, the only comedy that ...read more.

Our piece was lots of scenes put together; it had 9 short scenes altogether, which built up his life. Our final piece consisted of these short scenes: * Stefan being born * Being picked on and bullied at school * Being picked on and bullied at work * Being arrested for the girls murder * Interrogated by the police * Locked up in prison * Released from jail and meeting his mother * Collapsing in his home 18 months later * His funeral - attended by his mother who died 6 months later. I think that for each of the pieces that we did we could have showed Stefan's feelings more, the action seemed to be on his surroundings and other people, and Stefan didn't speak that much. For the interrogation we could have included a lot more, as ours didn't have as much interrogation as everyone else's did. Another improvement that we could have done is included more speech, although we wanted to show Stefan being bullied and how he felt by body language, facial and body expressions, we could have included a lot more speech, which combined with body language and everything else, could have made our pieces better. When we performed our pieces, we tended not to use all of the space that was available, so maybe we could have spread the props out more, so then the acting wouldn't be too cramped and seem confined. ...read more.