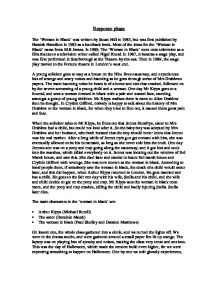 Response phase The 'Woman in Black' was written by Susan Hill in 1983, but was first published by Hamish Hamilton in 1983 as a hardback book. Most of the ideas for the 'Woman in Black' came from M.R James. In 1989, The 'Woman in Black' went onto television as a film thanks to a television writer called Nigel Kneal. In 1987, it became a stage play, and was first performed in Scarborough at the Theatre-by-the-sea. Then in 1989, the stage play moved to the Fortune theatre in London's west end. A young solicitor goes to stay at a house on the Nine lives causeway, and experiences lots of strange and scary noises and haunting as he goes through some of Mrs Drablows papers. The main haunting noise he hears is of a horse and cart that crashed, followed on by the severe screaming of a young child and a woman. One day Mr Kipps goes to a funeral, and sees a woman dressed in black with a pale and wasted face, standing amongst a group of young children. Mr Kipps realises there is more to Alice Drablow then he thought. In Crythin Gifford, nobody is happy to talk about the history of Mrs Drablow or the woman in black, for when they tried to find out, it caused them great pain and fear. When the solicitor talks to Mr Kipps, he finds out that Jennet Humfrye, sister to Mrs Drablow had a child, but could not look after it. So the baby boy was adopted by Mrs Drablow and her husband, who both insisted that the boy should never know that Jennet was his real mother. After a long while of Jennet trying to get contact with him, she was eventually allowed to be his nursemaid, as long as she never told him the truth. One day Jennets son was on a pony and trap going along the causeway, and it got lost and sunk into the marshes, which killed everybody on it. ...read more.

We thought it was important for the lighting to go with the rhythm of the banging, otherwise it would look a bit muddled up and confusing. When the door opened, I think we should have had a long, loud scream to represent the haunting of the woman in black and the death of Stella and her child on the pony and trap, for this would make the audience really scared and shocked. We could have also made the lighting a still orange, to show the creepiness and horror Mr Kipps would have felt. Red would have also been good to show these emotions, but the performance would have been more interesting with a range of colours. We decided to have the door slam shut to really make the audience startle, but would have been better if Sophie bung a bit louder, and I if emphasised it a lot better. For this, we decided to have all the lighting go completely out, to make the audience really scared, startled and worried, for they would not know what sort of presence was there with them. On the next scene, we had me as the woman in black wearing a beige, brown coloured mask, because my group and everybody else in the class thought it looked a lot more effective than the white mask. I think a white mask would have been more effective though, for it would of made my face stand out a lot more, making my presence there a lot more creepy for the audience. Once again Sophie was doing the banging, but now I think it was unfair on her, for she did not get to do much, and we had a bit too much people for this scene. I used a chair as the rocking chair, and because it could not rock, I gently went backwards and forwards on the edge to try and show it was a rocking chair. ...read more.

There is a recorded noise of the pony and trap going away, then all of a sudden the lighting turns to a really dim grey, and the woman in black steps out from behind the curtain. Then the audience hears the recording of the screaming again, but this time, it represents Stella and her child. This happened really quick, and would of completely shocked the audience, for no suspense was built up towards this event. The dim, grey light would of created a really ghostly, nightmarish sort of scene, and would show how dispaired and upset Mr Kipps felt when he realised he had lost the ones he loved. In my performance, I used role play when I switched from the act of Stella to the role of Mr Kipps. This helped me to understand how Stella and her son were completely innocent victims, and how petrifyed they felt when they were dying and had nobody around to help them. It also helped me to understand that it must have been a really horrible experience for the woman in black when she was isolated from her one and only child, and how she felt like nobody else should have the chance to settle down with a happy family, because she never got the chance to. It also helped me understand that you do not know what it feels like to lose a child until you have been through it yourself, and that you should never take anyone elses child as your own, for revenge will happen later on. When me and Adelade were having a conversation towards the end about the woman in black, we had a white spot light on us. This emphasized the woman in black, and how she affected Mr Kipps life emotionally. It also helped me understand that if Mr Kipps did not stay at Eel Marsh house, he would not have looked further into Jennet Humfryes life history, and got involved with the woman in Black. ...read more.