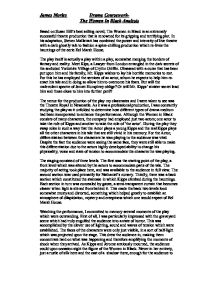 Based on Susan Hill's best selling novel, The Women in Black is an extremely successful theatre production that is renowned for its gripping and terrifying plot. In his adaptation, Steven Mallatratt has combined the power and intensity of live theatre with a dark ghostly tale to fashion a spine-chilling production which re-lives the hauntings of the eerie Eel Marsh House. The play itself is actually a play within a play, somewhat merging the borders of fantasy and reality. Meet Kips, a Lawyer from London entangled in the dark secrets of the secluded Yorkshire Village of Crythn Griffin. Obsessed with a curse that has been put upon him and his family, Mr. Kipps wishes to lay his horrific memories to rest. For this he has employed the services of an actor, whom he expects to help him re-enact his tale and in doing so allow him to overcome his fears. But will the malevolent spectre of Jennet Humphrey oblige? Or will Mr. Kipps' sinister secret lead him and those close to him into further peril? The venue for the production of the play my classmates and I were taken to see was the Theatre Royal in Newcastle. ...read more.

This was accomplished by the clever use of lighting, sound and waves of tension which were established. The faces of the characters were only just visible, in a sort of half-light which was projected upon the stage. This drew the audience in, making them concentrate hard on what was happening and therefore amplifying the moments of shock when they arrived. As Kipps and Jerome anxiously mourned, the audience could upon occasion sight the figure of the Women in Black. Never in her entirety, just a rustle of silk here and the cast of a shadow there, enough for the audience to gain apprehension of a horrific spectre, but never get close enough to reveal her secrets. As I have mentioned, the audience's differentiation between characters was of ample importance. Whilst there were many ways in which this was achieved, the use of voice by the actor was very significant. From the upper crust accent of the executive lawyer Mr Bentley to the Yorkshire dialect of Sam Daily, voice greatly defined the characters and was also suggestive of their personalities. Speaking in queens English often suggests intelligence and haughtiness, whilst a broad Yorkshire accent suggests the reverse. ...read more.

A shrill and piercing scream was amplified from speakers positioned around the theatre, giving the impression it was coming from somewhere within and leaving more susceptible members of the audience to believe the Women had come to haunt them. The audience's reaction to the play was overall one of horror and disbelief. The presence of a spectre could constantly be felt, whether it was from the apparent unease of the characters whenever the Women was mentioned or from the appalling screams which filled the theatre during the hauntings. There were also some comical scenes which went down very well with the audience, notably at the beginning when Arthur Kipps monotonously reads his Manuscript and also the subsequent determination of the undeterred actor despite this: 'We'll make an Irving of you yet!' Moments such as this add another aspect to the play, and help to lull the audience into a false sense of security. To conclude, the performance in my opinion was above average; the level of audience interaction was excellent, the acting was of a high quality, and consequently the characters were believable. When you have an audience who believe in the characters, they come to life, not only on the stage but in the audience's imaginations, something which is invaluable in an authentic ghost-tale such as this one. ?? ?? ?? ?? James Morley Drama Coursework- The Women In Black Analysis ...read more.

A generally well written review that considers the roles of characters and the staging of the production well. At times the expression is too informal and becomes conversational rather than analytical.