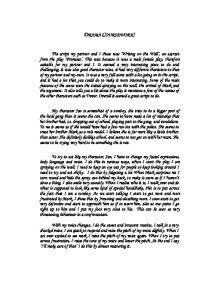 Writing on the Wall

DRAMA COURSEWORK! The script my partner and I chose was 'Writing on the Wall', an extract from the play 'Promises'. This was because it was a male female play, therefore suitable for my partner and I. It seemed a very interesting piece to do and challenging, it was also good character wise, it had very different characters to that of my partner and my own. It was a very full scene with a lot going on in the script, and it had a lot that you could do to make it more interesting. Some of the main features of the scene were the initial spraying on the wall, the arrival of Mark and the argument. It also tells you a bit about the play it mentions a few of the names of the other characters such as Trevor. Overall it seemed a great script to do. My character Jan is somewhat of a tomboy, she tries to be a bigger part of the local gang than it seems she can. ...read more.

This can be seen as very threatening behaviour in a confrontation. With my voice changes, I do the sweet and innocent routine, I talk in a very shocked voice, I am quick to respond and raise the pitch of my voice slightly. When I act over excited to see mark I raise the pitch of my voice again. When I try to put across frustration, I raise the tone of my voice and lower the pitch. At the end I say 'I'll make sure of that' I do this by almost muttering it. Problems we faced during rehearsals were mainly trivial such as distractions from over groups, absences and finding the energy on Thursday lessons because it is just after physical education and I am usually exhausted. Bigger problems was mainly that I was having a lot of difficulty with lines, I was getting lines confused I soon sorted this out though by going through my lines at home, and highlighting keywords in Darren's lines and associating them with mine so I remember my cue and what my next line ...read more.

Our final performance went quite well, I did get a bit disorientated, and I stood too far away from Mark and the centre of the stage for the best part of the performance, I was worried about forgetting lines but fortunately this did not happen. I was pleased with how it went; it did go a lot better than rehearsals. If I could have changed anything it would have been how far away I was the fact that I had forgot my trainers and the lighting because there was difficulties in getting the camera to see us both, it looked odd me standing outside supposedly and not having shoes on, and there was a bit we had planned for our lighting were all went down except a white profile light was shining on me and mark commented on my clothes this was too draw attention to the fact that I had changed since Mark had last seen me this could not happen though because the person who had done this for us previously was absent. Overall though, it was a success. ...read more.