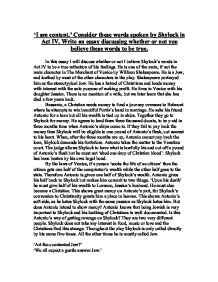 &amp;#145;I am content.&amp;#146; Consider these words spoken by Shylock in Act IV. Write an essay discussing whether or not you believe these words to be true.

'I am content.' Consider these words spoken by Shylock in Act IV. Write an essay discussing whether or not you believe these words to be true. In this essay I will discuss whether or not I believe Shylock's words in Act IV to be a true reflection of his feelings. He is one of the main, if not the main character in The Merchant of Venice by William Shakespeare. He is a Jew, and loathed by most of the other characters in the play. Shakespeare portrayed him as the stereotypical Jew. He has a hatred of Christians and lends money with interest with the sole purpose of making profit. He lives in Venice with his daughter Jessica. There is no mention of a wife, but we later learn that she has died a few years back. Bassanio, a Christian needs money to fund a journey overseas to Belmont where he attempts to win beautiful Portia's hand in marriage. He asks his friend Antonio for a loan but all his wealth is tied up in ships. Together they go to Shylock for money. He agrees to lend them three thousand ducats, to be paid in three months time when Antonio's ships come in. If they fail to pay back the money then Shylock will be eligible to one pound of Antonio's flesh, cut nearest to his heart. ...read more.

'I hate him for he is a Christian. But more, for that in low simplicity he lends out money gratis, and brings down the rate of usance here with us in Venice.' He then goes on to tell Antonio about all the times he has 'rated' him in the Rialto, called him names and spat upon him and how he has 'borne it with a patient shrug'. But then he offers his friendship to Antonio along with the bond. We know that he has no desire whatsoever for Antonio's friendship. He is also very cunning when it comes to the terms of the bond. He plays down the cutting of Antonio's flesh to be nothing more than a little joke, when in reality it is a clever way to get revenge on Antonio and to possibly kill him. Many people have different opinions of him. Some see him as an evil villain while others see him as a misunderstood person who only wants what is rightfully his. Anti-Semitism had been around in Britain ever since the first Jews arrived. Stories were told of Jews kidnapping babies, drinking blood in sacrificial rituals and forcing adult circumcisions. In 1591 a play was written portraying the main character, a Jew, as being a very evil murderer who killed his own daughter along with a convent of nuns. ...read more.

But, even though Shylock gets the sympathy of the audience in some cases, he usually follows with a cold-hearted act that quickly dissolves all sympathy. For instance, after he learns of Jessica's sale of the ring he turns his attentions to Antonio and his sunken ships. He immediently cheers up at the thought of having a pound of Antonio's flesh and triumphing over the Christians. Shylock remains a consistently powerful character throughout the play. His speeches are long and effective and are spoken with passion. But during the trial scene, after Antonio makes him change his religion, he becomes quiet and remorseful. He leaves immediently, telling the court that he is ill and to send the deed after him. 'I pray you give me leave to go from hence, I am not well. Send the deed after me, and I will sign it.' He has been beaten and he is no longer in charge. He is embarrassed and feels sorry for himself. After taking all the above into account, I come to the conclusion that Shylock is nowhere near being "content". After fighting hard and zealously for the right to the pound of flesh over the duration of the play, he would not be wiling to give it all up just like that. Shylock knows that he has been beaten by his own bond and therefore does not want to be humiliated any more by further fighting on his behalf for the pound of flesh. *spellchecker has been used ...read more.