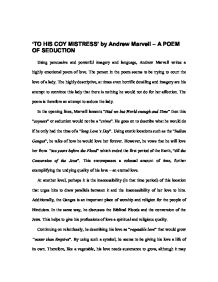 'TO HIS COY MISTRESS' by Andrew Marvell - A POEM OF SEDUCTION Using persuasive and powerful imagery and language, Andrew Marvell writes a highly emotional poem of love. The person in the poem seems to be trying to court the love of a lady. The highly descriptive, at times even horrific detailing and imagery are his attempt to convince this lady that there is nothing he would not do for her affection. The poem is therefore an attempt to seduce the lady. In the opening lines, Marvell laments "Had we but World enough and Time" then this "coyness" or seduction would not be a "crime". He goes on to describe what he would do if he only had the time of a "long Love's Day". Using exotic locations such as the "Indian Ganges", he talks of how he would love her forever. However, he vows that he will love her from "ten years before the Flood" which ended the first period of the Earth, "till the Conversion of the Jews". This encompasses a colossal amount of time, further exemplifying the undying quality of his love - an eternal love. At another level, perhaps it is the inaccessibility (in that time period) ...read more.

His vision now changes to into "Desarts of Eternity" where his lady's beauty "shall no more be found". The imagery now transforms to one of unhappiness and death. Using graphic imagery of the "marble vault" in which they will be buried and "worms" eating their dead bodies - Marvell is trying to convey his message of urgency and mortality. The urgency is that of time flying by. He seems to be trying to remind his lady that time is of essence in this life. Thus, his seduction moves into a higher gear as he pressures her with dire warnings of what time will do to them. He visualized being dead and lying in a grave with worms everywhere. Their bodies "turn to dust" and "into ashes all my lust". He is in a sense warning her too return his mortal love or face having never loved before she dies and turns to dust. The talk of deserts and turning to ashes and dust implies a total lack of water. This is opposite to the first part of the poem that is awash with images of flowing water. Perhaps it is symbolic of his ever flowing love and a never-ending life that he dreams of, where time goes on forever. ...read more.

He wants to guide her through the "Iron gates of Life" as her husband. While they cannot command time to "Stand still", it cannot stop them from loving each other. However, they can make "him run", by living their life to the fullest and happiest possible. Which he implies is by fulfilling their love. The reader is left with an image of the two lovers fleeing the sunset and the night. An image of darkness that is possibly symbolic of the end of time or perhaps even Armageddon. A close reading of this poem allows us to realize the lengths that the poet will go to for the love of this woman. He tries all methods of seduction. He muses about a beautiful and undying eternal love and a wonderful life together. Then he rejects the notion of eternal love as he realizes he is mortal and that life passes by quickly and ends in death. He stresses that moral love will die with death - therefore he pleads with his love to respond to him. He tried to seduce her with images of death as an alternative to his love. He wants her to live for the moment because life ends too soon. Thus using such persuasive and powerful imagery, Andrew Marvel piece is one of intense seduction. ...read more.