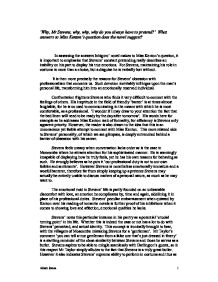 'Why, Mr Stevens, why, why, why do you always have to pretend?' What answers to Miss Kenton's question does the novel suggest? In assessing the answers Ishiguro' novel makes to Miss Kenton's question, it is important to emphasise that Stevens' constant pretending really describes an inability on his part to display his true emotions. For Stevens, maintaining his role in costume is more than a choice, but a disguise he is verbally lost without. It is then more precisely the reasons for Stevens' obsession with professionalism that concerns us. Such devotion inevitably infringes upon the man's personal life, transforming him into an emotionally reserved individual. Confrontation frightens Stevens who finds it very difficult to connect with the feelings of others. His ineptitude in the field of friendly 'banter' is at times almost laughable, for he is so used to communicating in the means with which he is most comfortable, as a professional. 'I wonder if I may draw to your attention the fact that the bed linen will need to be ready by the day after tomorrow'. His words here for example as he addresses Miss Kenton reek of formality, for efficiency is Stevens only apparent priority. However, the reader is also drawn to the idea that this is an unconscious yet feeble attempt to connect with Miss Kenton. This more relaxed side to Stevens' personality, of which we see glimpses, is deeply entrenched behind a barrier of obsession with his career. ...read more.

This very reserved yet dedicated approach outlined as his father 'trademark' by Stevens seemingly mirrors those ideals Stevens himself so highly values. In this way it is clear Stevens wishes to emulate his fathers take on life, thus illustrating the major role played by Stevens senior in steering his son toward the insular, emotionally insecure life he now chooses to follow. On the night of the great 1923 conference we are presented with a vivid illustration of Stevens emotional detachment from his father, and the resulting relationship between two men who always put their work before their emotions. Their exchanges are always on a formal basis, lacking the spontaneity of a normal relationship. There is no exception even as Stevens Senior lies on his death bed. Stevens refers to his father in the third person, clearly uncomfortable speaking to him directly, 'I'm very glad father is feeling better'. As the plot unravels, Stevens moves further and further geographically from what he knows, but more importantly he also embarks on a journey through his memory, into previously unexcavated recesses. He begins to question the meaning of his entire lonely existence, and in so doing questions Darlington's (and therefore his own) greatness. Stevens' devotion to his work is really underpinned by an unfaltering belief that he serves those of importance with political power, potential peacemakers. He considers this the very pinnacle of achievement. ...read more.

On this occasion Stevens is concerned to avoid any recognition of his association with the disgraced Darlington. Stevens is also anxious to protect those ideals he has stood by most of his career. When questioned over his beliefs in dignity by the locals in Moscombe Stevens seems unwilling to begin a debate. He opts to remain quiet about his own opinions stating 'I saw little point in attempting to explain this statement further'. He says this after recognising dignity to be the quality being referred to. Perhaps Stevens' failings stem from his amazing dedication to his profession or indeed from a cold childhood. Whatever the reasons for Stevens' endless pretence, his physical and emotional journeys come to a close at Weymouth. It is late in the day literally but also metaphorically, as we reach a final drawing to a close of a potential relationship between Stevens and Miss Kenton. Stevens' claims 'I know I'm not awaited by emptiness'. Yet the reader is all too aware this simply means work will always be there to occupy his time, but not his heart. The remains of Stevens' day are a sad reflection of the outcome of a life centred on unwavering servitude. It appears therefore only fitting that the one woman Stevens seems to love shares his tremendous ability in her profession. Yet this is a love unfulfilled, for as Stevens comes to realise 'in bantering lies the key to human warmth', something Stevens may never experience. ?? ?? ?? ?? 4 Adam Jones ...read more.