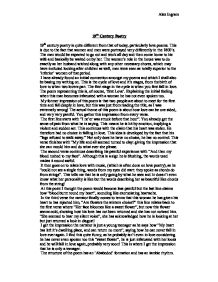 19th Century Poetry 19th century poetry is quite different from that of today, particularly love poems. This is due to the fact that women and men were portrayed very differently in the 1800's. The men would be expected to go out and work all day and then come home to his wife and basically be waited on by her. The women's role in the house was to do exactly as her husband wished along with any other necessary chores, which may have included looking after children as well, men were seen as totally superior to the 'inferior' women of that period. I have already found an initial connection amongst my poems and which I shall also be basing my writing on. This is the cycle of love and it's stages, from the birth of love to when two lovers part. The first stage in the cycle is when you first fall in love. The poem representing this is, of course, 'first Love'. Explaining the initial feeling when this man becomes infatuated with a woman he has not even spoken too. My former impression of this poem is that two people are about to meet for the first time and fall deeply in love, but this was just from reading the title, as I was extremely wrong! The actual theme of this poem is about how love can be one sided, and very very painful. You gather this impression from every verse. The first line starts with "I ne'er was struck before that hour". ...read more.

The general structure of the poem is one building up an argument during the first three verses with the repetition of "fool I refuse you" with a negative, demanding, assertive tone. I appreciate Christina Walsh because this poem goes far against the opinions of people, mostly men at this period of time, the idea of men and women being equals was not even thought of and this is saying how she wants her relationship to be. The third poem I'm analysing is 'Vilegature'. Vilegature is Italian and it means 'a home in Italy', this poem is written by Edith Nesbit and is based on a lover that has gone away, at this point in time - referring to the cycle of love - their love is starting to fade. This poem has a lot of references to nature, which, like music, is another thing often related to love as it is supposed to be beautiful and innocent. The fist line demonstrates its use of nature, "My Window, framed in pear-tree bloom" followed by "White-curtained shone, softly and lighted", giving off a soft and romantic dream like scene. The forth line, " Your ghost last night climbed uninvited", which made me decided weather I thought that there actually was a ghost or it was her just having a dream as there was already a dream like scene set. Also, the line gives the impression that the ghost was not wanted. I thought it was her having a vision because in the second verse she then goes on to write "Your solid self long leagues away", showing her lover is not ...read more.

She then makes, what I feel is a very considerate remark, "And if thou will, remember, And if thou will, forget", which is her telling her lover that if he remembers her do not mourn and if he eventually does forget her, then she will be fine with that. The second verse is written about the things that she will not see, such as, "I shall not see the shadows, I shall not feel the rain", I think she is saying this to help her lover come to terms that when she is gone he shouldn't mourn because she will not be able to know it so he should not bother. The poem comes to an end with the lines, "Haply I may remember, and haply may forget." You can tell she really does not want her lover to mourn and basically, she wants him to go out and be happy and if he fell in love again she would be happy for him. I realised there are two ways at looking at this poem, one is that this is the kind of true, considerate love and she cares so much about her lover that she does not want him to be sad and mourn, just to be happy whether he forgets her or not. Or, the other way you could look at it, (which is no where near as nice), would be that she may not particularly care, and that she would rather him leave her alone to die in peace! Alex Ingram ...read more.