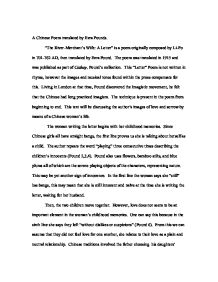 A Chinese Poem translated by Ezra Pounds. "The River-Merchant's Wife: A Letter" is a poem originally composed by Li-Po in 701-762 AD, then translated by Ezra Pound. The poem was translated in 1915 and was published as part of Cathay, Pound's collection. This "Letter" Poem is not written in rhyme, however the images and musical tones found within the prose compensate for this. Living in London at that time, Pound discovered the Imagistic movement, he felt that the Chinese had long practiced imagism. The technique is present in the poem from beginning to end. This text will be discussing the author's images of love and sorrow by means of a Chinese woman's life. The woman writing the letter begins with her childhood memories. Since Chinese girls all have straight bangs, the first line proves us she is talking about herself as a child. The author repeats the word "playing" three consecutive times describing the children's innocents (Pound 2,3,4). Pound also uses flowers, bamboo stilts, and blue plums all of which are the serene playing objects of the characters, representing nature. ...read more.

She then believes that she loves him and will do so forever. Pound insists on "forever" leading us to the realization of the extent of her new love (Pound 13). When she turns sixteen, her husband leaves to work in a river with swirling eddies, mirroring her worry and fright. She interprets the monkey's noise as being of sorrow, again mirroring her grief. He did not want to leave her either as he left dragging his feet. At this point, Pound reverses his style, plunging into multiple levels of abstract images. Five months, maybe more, pass and the moss by the river has grown so deep that she can't even remove it. This image can be viewed as sorrow growing in her heart, a feeling strongly affecting her. She also sees the darkness of autumn and the signs that it's coming brings, such as leaves falling in wind. The paired butterflies are fading color, just like the relationship with her lover is fading. The line "Over the grass in the West garden;" makes us doubt that her husband is still alive (Pound 24). ...read more.

Through great images of nature the author of this poem shows us the impact of grief upon one who is apart from her love. This journey through the life of a Chinese woman, first forced to marry and then despite herself falls in love with this man, is about human sorrow and how we deal with separation. The translation by Pound resounds with grief and effectively makes use of natural imagery. This letter is not sent to anyone, it simply goes through her life and emotions as if she is talking to herself. The poem contains a lot of "I" and "you" so that the reader can personally relate to it. Her husband's departure soon after she began to truly love him causes her to feel pain and grief, causing her perception of the world to change Even though the man is supposed to be back, there still is doubts in the images given to us that never he will return; he may have died or may simply decide to never come back. However, we can hope that happiness will come anew. ...read more.