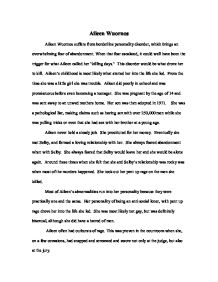 Aileen Wuornos suffers from borderline personality disorder, which brings an overwhelming fear of abandonment. When that fear escalated, it could well have been the trigger

Aileen Wuornos Aileen Wuornos suffers from borderline personality disorder, which brings an overwhelming fear of abandonment. When that fear escalated, it could well have been the trigger for what Aileen called her "killing days." This disorder would be what drove her to kill. Aileen's childhood is most likely what started her into the life she led. From the time she was a little girl she was trouble. ...read more.

Aileen never held a steady job. She prostituted for her money. Eventually she met Selby, and formed a loving relationship with her. She always feared abandonment when with Selby. She always feared that Selby would leave her and she would be alone again. Around these times when she felt that she and Selby's relationship was rocky was when most of the murders happened. She took out her pent up rage on the men she killed. ...read more.

Aileen often had outbursts of rage. This was proven in the courtroom when she, on a few occasions, had snapped and screamed and swore not only at the judge, but also at the jury. All Aileen was looking for in her life was love and acceptance, which she felt she had with Selby. When she had feelings that she and Selby's relationship was in trouble she would kill a john and flash his money around Selby so they could have some "fun." Aileen found love, although it was too late to help herself. ...read more.