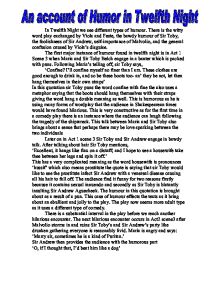 In Twelfth Night we see different types of humour. There is the witty word play exchanged by Viola and Feste, the bawdy humour of Sir Toby, the foolishness of Sir Andrew, self-importance of Malvolio, and the general confusion caused by Viola's disguise. The first major instance of humour found in twelfth night is in Act 1 Scene 3 when Maria and Sir Toby Belch engage in a banter which is packed with puns. Following Maria's telling off, sir Toby says, 'Confine? I'll confine myself no finer than I am. These clothes are good enough to drink in, and so be these boots too- an' they be not, let then hang themselves in their own straps' In this quotation sir Toby puns the word confine with fine the also uses a metaphor saying that the boots should hang themselves with their straps giving the word hang a double meaning as well. This is humorous as he is using many forms of wordplay that the audience in Shakespearean times would have found hilarious. This is very constructive as for the first time in a comedy play there is an instance where the audience can laugh following the tragedy of the shipwreck. ...read more.

This humour is very effective as not only does it brings about a prejudice feel to the whole story it also makes the audience consider whether that is where the story is going to end up whether Sir Andrew will end up fighting with Malvolio because he is a puritan. A very well developed instance of humour is when Malvolio reads the letter supposedly written by Olivia. The humour occurs as a result of a misunderstanding and dramatic irony as the audience already know that the letter is in fact written by Maria. As Malvolio begins to ponder over whether this letter is addressed to him he utters, 'M.O.A.I. This simulation is not as the former: and yet to crush this a little, it would bow to me, for every one of these letters are in my name.' This would be entertaining for the audience to observe as they know unlike Malvolio's character that the letter is in fact addressed to him, more humour is later added when Malvolio later adds after reading the letter: 'I will be strange, stout, in yellow stockings, and cross-gartered, even with the swiftness of putting on' The quotation immediately create a very funny feel to the play as the audience can just picture the rest of the household peering surprised at Malvolio's wacky and weird sense of style. ...read more.

Humour is portrayed in the very short scene- Act 4 scene 3 when Olivia mistakenly marries Sebastian thinking it is Cesario. 'Plight me the full assurance of your faith' Says Olivia which is like a proposal. The rest of a play is now affected as the audience know the play is coming to a close because the main misunderstanding of confusion between Sebastian and Cesario has reached a climax. The audience feels extremely tense as the obviously know that sooner or later either Orsino or Olivia will find out what has been taking place but the question is, how? In the last scene there is not much direct humour but most of the misunderstandings in the play are later understood as a result of this scene. 'One face, one voice, one habit, and two persons! A natural perspective, that is and is not!' Orsino is perceptibly puzzled by this misunderstanding of twins who have been mixed up in each others lives. The audience's impression over all this would be that they find it extremely funny because they have known all along and Orsino's character has just found out. The text is given a finalising feel as all characters have now worked out the lurking mysteries. ...read more.