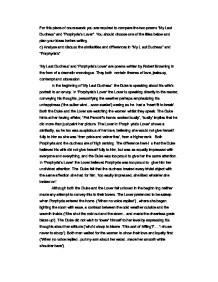 Analyse and discuss the similarities and differences in

For this piece of coursework you are required to compare the two poems "My Last Duchess" and "Porphyria's Lover". You should choose one of the titles below and plan your ideas before writing. c) Analyse and discuss the similarities and differences in "My Last Duchess" and "Porphyria's" 'My Last Duchess' and 'Porphyria's Lover' are poems written by Robert Browning in the form of a dramatic monologue. They both contain themes of love, jealousy, contempt and obsession. In the beginning of 'My Last Duchess' the Duke is speaking about his wife's portrait to an envoy. In 'Porphyria's Lover' the Lover is speaking directly to the reader, conveying his thoughts, personifying the weather perhaps emphasizing his unhappiness ('the sullen wind...soon awake') seeing as he had a 'heart fit to break'. Both the Duke and the Lover are watching the women whilst they speak. The Duke hints at her having affairs; 'Fr� Pandolf's hands worked busily', 'busily' implies that he did more than just paint her picture. The Lover in 'Porphyria's Lover' shows a similarity, as he too was suspicious of her love, believing she would not give herself fully to him as she was 'from pride and vainer ties', from a higher rank. ...read more.

Both women felt comfortable with their lovers', they felt secure as their lovers' showed no indication of their discontempt for their behavior. The Lover felt as if Porphyria was a coward, the repetition of her yellow hair emphasizes this (yellow is portrayed as cowardice), not wanting to give herself fully to him, 'she Too weak...'. The Duke believed the Duchess was too simple for him, unlike the Lover, the Duchess was not important to him. He has a need to control things and people, like his wife. This is revealed through the following lines 'Oh, sir, she smiled, no doubt, Whene'er I passed her; but who passed without Much the same smile? This grew; I gave commands; Then all smiles stopped together' The Duke could not accept her affability, he could not control it, so he 'gave commands' and ended it. The Lover, too, has an urge to control and possess his lover. He wants to keep Porphyria forever, preserving her, controlling her ('That moment she was mine, mine, fair'). The main difference here is that the Duke wants to execute his wife as he cannot control her, and the Lover murders Porphyria so he can keep her forever as he cannot control her either. ...read more.

His voice showed his need to control his wife, to stop her undesirable behavior. At the end of the monologue, the Duke is polite and persuasive, claiming that he likes the count, his 'known munificence' and his daughter, who he is interested in not only for the 'dowry'. He is arrogant, like the Lover, towards the few final lines, and refers to the counts daughter as his 'object', while admiring a sculpture created for him; showing the pompous aspect of his character. In the beginning of the poem, the Lovers' tone is cold, hostile and annoyed portrayed through words like 'sullen', 'spite' and 'vex'. When Porphyria appears, his attitude becomes obsessive and appreciative, as he watches her every movement as she 'glides' around the house, observing her 'yellow hair'. There is still a bitter quality to his words as he contemplates her love for him ('Too weak, for all her heart's endeavor To set its struggling passion free'). When the Lover realized Porphyria did genuinely love him his tone is ecstatic and rapturous. 'Porphyria worshipp'd me; surprise Made my heart swell... While I debated what to do. That moment she was mine, mine fair,' The line exposes his arrogance after he has murdered his Lover, 'And yet God has not said a word'. ...read more.