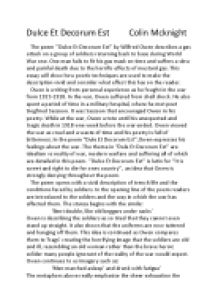 ﻿Dulce Et Decorum Est Colin Mcknight The poem ??Dulce Et Decorum Est? by Wilfred Owen describes a gas attack on a group of soldiers returning back to base during World War one. One man fails to fit his gas mask on time and suffers a slow and painful death due to the horrific effects of mustard gas. This essay will show how poetic techniques are used to make the description vivid and consider what effect this has on the reader. Owen is writing from personal experience as he fought in the war from 1915-1918. In the war, Owen suffered from shell shock. He also spent a period of time in a military hospital, where he met poet Siegfried Sassoon. It was Sassoon that encouraged Owen in his poetry. While at the war, Owen wrote until his unexpected and tragic death in 1918-one week before the war ended. Owen viewed the war as cruel and a waste of time and his poetry is full of bitterness. In the poem ?Dule Et Decorum Est?,Owen expresses his feelings about the war. The theme in ?Dule Et Decorum Est? are idealism vs reality of war, modern warfare and suffering all of which are detailed in this poem. ??Dulce Et Decorum Est?? is latin for ??It is sweet and right to die for ones country??, an idea that Owen is strongly denying throughout the poem. ...read more.

The words Owen uses to describe the dying man such as ??chocking?? tells the reader that the dying man?s lungs has been filled up with mustard gas so much that he cannot take anymore and is chocking to his death. It makes the readers feel sick to think of a soldier dying and suffering in such a manner as a result of sacrificing their lives to fight for their own country. The horrors that the dying man goes through are horrific as it is a harsh death. The horrors of the war make the readers think that the men dying at the war front is a painful death because it is a slow death. Owen makes this vivid as he helps create an image in the reader and my head of how horrific dying by mustard gas is as it fills up their lungs which would be very painful. Also, Owen?s word choice of ??drowning?? emphasises vividly that the dying man cannot even barley breath because of this gas that he is drowning inside of mustard gas. The word choice that the poet uses such as ??guttering?? helps the readers to create a vivid image of how scared and terrified the man must have felt as the mustard gas burned his inside alive. ...read more.

This would give the reader a vivid image of death because of the poet?s word choice. Owens careful word choice tells the readers that these sores are horrific and terrifying. The readers knows this by the vulgar word choice such as ?vile?. This gives the readers a hint of death. Incurable sores also gives the reader of how much pain and torture the dying man was in as he knows he is going to die. In the final stanza, the poet is talking about how much pain the dying man is in. Owen is trying to tell the reader that the truth and memories of the war is too much to tell as the war is a dangerous and petrifying place to be. The poem ?Ducle Et Decorum Est? vividly describes the gas attack and subsequent death of a soldier through effective use of word choice, striking imagery and similes. The reader can visualise the event and shocked at the condition of the soldiers as they are described at the start of the poem. My overall opinion of this poem is that the stanzas help us create images in our heads as the words are very effective. The stanzas also use techniques such as onomatopoeia and alliteration which makes the reader more sophisticated with the point that Owen is trying to get through. Overall the poem ?Ducle Et Decorum Est? deals thoroughly with the dying man and the gas attack on the soldiers. ...read more.