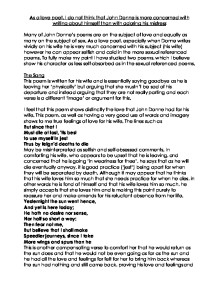 As a love poet, I do not think that John Donne is more concerned with writing about himself than with adoring his mistress,

As a love poet, I do not think that John Donne is more concerned with writing about himself than with adoring his mistress Many of John Donne's poems are on the subject of love and equally as many on the subject of sex. As a love poet, especially when Donne writes vividly on his wife he is very much concerned with his subject (his wife) however he can appear selfish and cold in the more sexual referenced poems. To fully make my point I have studied two poems, which I believe show his character as less self-absorbed as in the sexual referenced poems. The Song This poem is written for his wife and is essentially saying goodbye as he is leaving her 'physically' but arguing that she mustn't be sad of his departure and instead arguing that they are not really parting and each verse is a different 'image' or argument for this. I feel that this poem shows distinctly the love that John Donne had for his wife. This poem, as well as having a very good use of words and imagery shows to me true feelings of love for his wife. The lines such as But since that I Must die at last, 'tis best to use myself in jest Thus by feign'd deaths to die May be misinterpreted as selfish and self-obsessed comments. ...read more.

It is a very sincere poem to raise her spirits and help her when he is not there. A Fever In this poem, it is almost the situation in the poem above reversed. In Song, Donne has to leave his wife and telling her not to worry but in a fever, his wife is ill and in a fever and he is begging her not to leave him and worrying about her dying and leaving him alone. Song, he argues why she should not worry or be upset and in this he argues why she should not die in begging and flattering talk. Through the poem the tone lowers, presumably as the fever worsens and he becomes more calm within it and begins to get sentimental about her rather than anger at the fever and her for being ill. Oh do not die, for I shall hate All women so, when thou art gone, that thee I shall not celebrate, When I remember, thou wast one If she was to die, he could never love or indeed at all like another woman again but if I was to have to do that then I wouldn't be able to 'celebrate' or love the memory of her because he would only remember her as a woman, who we then hate. This is a somewhat twisting contention which is rather rambling but reflects his feeling of confusion and desperation at the prospect of losing one whom he loves so dearly. ...read more.

The tone in the poem has gradually softened, from the original anger he has come to this where it seems he has accepted her state and she seems to be worsening and nearer death or perhaps he has only just realised it. This poem could perhaps be referred to as a truer method of judging his love for his wife than Song. Song is written when he is leaving her and it doesn't tell of his feelings, only those to reassure her. This poem, he is trying to stop her from leaving by talking to her and asking her. However, they both tell of their relationship and of their love. In answer to my beginning statement that I do not think that John Donne is more concerned with writing about himself than with adoring his mistress, I still believe that. In his sexual poems such as The Apparition, The Flea and Going to bed he seems only concerned with sex and himself and I would agree in those contexts he seems selfish and uninterested in anything else the mistresses have to offer. However, when he is a love poet and he is writing about and to his wife, he still writes with the same wit and cleverness but the writing flows and sounds so beautiful. He is very much concerned with his wife more than himself as every image of her leaves us with an angelic image of her and his love for her. ...read more.