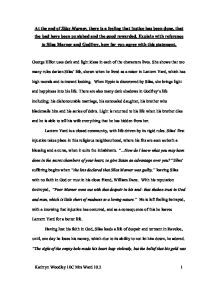 At the end of Silas Marner, there is a feeling that justice has been done, that the bad have been punished and the good rewarded. Explain with reference to Silas Marner and Godfrey, how far you agree with this statement.

At the end of Silas Marner, there is a feeling that justice has been done, that the bad have been punished and the good rewarded. Explain with reference to Silas Marner and Godfrey, how far you agree with this statement. George Elliot uses dark and light ideas in each of the characters lives. She shows that too many rules darken Silas' life, shown when he lived as a miser in Lantern Yard, which has high morals and is inward looking. When Eppie is discovered by Silas, she brings light and happiness into his life. There are also many dark shadows in Godfrey's life including; his dishonourable marriage, his concealed daughter, his brother who blackmails him and his series of debts. Light is returned to his life when his brother dies and he is able to tell his wife everything that he has hidden from her. Lantern Yard is a closed community, with life driven by its rigid rules. Silas' first injustice takes place in this religious neighbourhood, where his fits are seen as both a blessing and a curse, when it suits the inhabitants. "...How do I know what you may have done in the secret chambers of your heart, to give Satan an advantage over you?" ...read more.

The robbery transforms Silas, because, although at the time the action was wrong and undue, he becomes a kind loving character, with other pleasures excluding the money. He seeks help for the child and uses Mrs. Winthrop's advice that he"... must bring her up like christened folk's children, and take her to church, and let her learn her catechize." This open mind could be considered to have been influenced by Mrs. Winthrop's contemporary open ideas, and so he begins to think of others around him. When Silas revisits Lantern Yard with Eppie, he discovers that it has been destroyed, and in its place a factory boasting mechanical and rigid rules, not unlike the original occupancy, is put in its place. He is unable, as he says- "... to make 'em know I was innocent o' the robbery. And Mr. Paston was a man with a deal o' light- I want to speak to him about the drawing o' the lots. And I should like to talk to him about the religion o' this country-side, for I partly think he doesn't know of it." This leaves Silas with an unfinished story, powerless to find out if he was found not guilty of the crime and letting his mind rest. ...read more.

It is clear that Eppie would have been very unhappy living in the Red House, for she says herself that "...I wasn't brought up to be a lady, and I can't turn my mind to it. I like the working folks, and their houses and their ways." It seems fair that she marries Aaron, and is able to reward herself for transforming Silas from a miser to a open minded, caring person. I would agree with the statement that there is a feeling that justice has been done, that the bad have been punished and the good rewarded at the end of the book due to Silas' discovery of Eppie who with her kind affection towards him, changes him to become more happy and open minded rewarding him for the unjust acts that occur to him. Dunstan's death is a punishment for his blackmailing of his older brother, and Godfrey receives penalties for concealing the truth from his wife and father. Each character learns from their mistakes that they make, such as Godfrey learns to understand that he should tell his wife his secrets. "Everything comes to light, Nancy, sooner or later. When God Almighty wills it, our secrets are found out." This shows a development of personality in all characters of the book, as they understand and learn from their wrong doings or receive their rewards. WORD COUNT: 1341 Kathryn Woodley 10C Mrs Ward 10.2 1 ...read more.