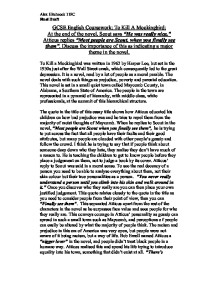 At the end of the novel, Scout says &quot;He was really nice.&quot; Atticus replies &quot;Most people are Scout, when you finally see them&quot;. Discuss the importance of this as indicating a major theme in the novel.

GCSE English Coursework: To Kill A Mockingbird: At the end of the novel, Scout says "He was really nice." Atticus replies "Most people are Scout, when you finally see them". Discuss the importance of this as indicating a major theme in the novel. To Kill a Mockingbird was written in 1962 by Harper Lee, but set in the 1930s just after the Wall Street crash, which consequently led to the great depression. It is a novel, read by a lot of people as a moral parable. The novel deals with such things as prejudice, poverty and parental education. This novel is set in a small quiet town called Maycomb County, in Alabama, a Southern State of America. The people in the town are represented in a pyramid of hierarchy, with middle class, white professionals, at the summit of this hierarchical structure. The quote in the title of this essay title shows how Atticus educated his children on how bad prejudice was and he tries to repel them from the majority of racist thoughts of Maycomb. When he replies to Scout in the novel, "Most people are Scout when you finally see them", he is trying to put across the fact that all people have their faults and their good attributes, but many people are clouded with other people's gossip and follow the crowd. I think he is trying to say that if people think about someone deep down who they hate, they realise they don't have much of a reason to. ...read more.

This subsequently gives an insight of how bad racism actually was back in the 1930's. Now it is being read in the present day, where most people take an entirely different view to racism and prejudice and it enforces how bad racism was even more so. Atticus not only teaches his children that racism is wrong, but alters their view on a person called Boo Radley, also known as Arthur, who was an out-of-control young man who had been ostracised by the community by gossip and word of mouth. They considered him dangerous and crazy as he was arrested for assault. He was detained for a while and then released. "They wanted to send him to an asylum, but his daddy said no Radley was going to any asylum. So they locked him up in the basement of the courthouse till he nearly died of the damp, and his daddy brought him back home." Boo then became a recluse in his house and nobody came near him as he was subjected to gossip. Jem says to Dill in the novel, "Boo only comes out at night when you're asleep and it's pitch-dark. When you wake up at night, you can hear him. Once I heard him scratchin' on our screen door, but he was gone by the time Atticus got there." Scout then realises he is good-hearted deep down when he places a blanket around her when she was cold. He also risked himself to saved her and Jem from Bob Ewell. ...read more.

There is not a person in this courtroom who has never told a lie, who has never done an immoral thing, and there is no man living who has never looked upon a woman without desire. He fights against the majority for justice and equality. Atticus also treats Mrs. Dubose, Scouts teacher, in a complimentary and kind way, which also forms his "saintly" characteristic. Even though Mrs. Dubose makes malicious comments and criticisms of Atticus and his children, he still treats her in a good way. He compliments her on her appearance and helps her when she goes to sit down. Atticus sets examples to teach Jem and Scout vital values that will benefit them in life. The way Atticus raised his children also plays a part in re-shaping his society for the better. He teaches Jem and Scout valuable lessons that help the next generation to break the cycle of discrimination. For example, when Atticus says " You never really understand a person until you consider things from his point of view . . . until you climb into his skin and walk around in it". This teaches the children not to judge people weather they are black, white, rich, or poor, until they understand their situation. He also teaches his children not to hurt or hate anyone that has done nothing to provoke them. The reader can see the view Atticus has on unnecessary hatred and how he strongly believes in equality. Jem and Scout calling Atticus by his name and not "father" or "daddy" shows this. ?? ?? ?? ?? Alex Hitchcock 11FC Final Draft ...read more.