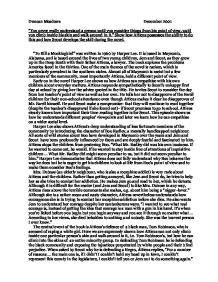 &amp;#147;You never really understand a person until you consider things from his point of view, until you climb inside his skin and walk around in it.&amp;#148; Show how Atticus possesses the ability to do this and how Scout develops the skill during the novel.

Duncan Meadows December 2001 "You never really understand a person until you consider things from his point of view, until you climb inside his skin and walk around in it." Show how Atticus possesses the ability to do this and how Scout develops the skill during the novel. "To Kill a Mockingbird" was written in 1960 by Harper Lee. It is based in Maycomb, Alabama, and is based around the lives of two young children, Jem and Scout, as they grow up in the Deep South with their father Atticus, a lawyer. The book explores the problems America faced in the thirties. One of the main themes of the novel is r****m, which is particularly prevalent in the southern states. Almost all of Maycomb is r****t but a few members of the community, most importantly Atticus, hold a different point of view. Early on in the novel Harper Lee shows us how Atticus can empathise with his own children about everyday matters. Atticus responds sympathetically to Scout's unhappy first day at school by giving her the advice quoted in the title. ...read more.

Here we are supremely shown how Atticus can not only climb inside one particular person's skin and walk around in it, i.e. Tom Robinson's, but how he can climb into the skins of an entire minority group. In defending Tom Robinson he is defending the black community and exposing the injustices perpetrated by white people and their blind prejudice. When asked by Scout why he is defending a n***o, Atticus replies, "For a number of reasons ... the main one is, if I didn't I couldn't hold my head up in town, I couldn't represent this county in the legislature, I couldn't tell you or Jem not to do something again." Throughout the book Harper Lee brings to our attention how Atticus understands the essence of other human beings. He is particularly generous in his understanding of Duncan Meadows December 2001 individuals disliked or shunned by most people. Even when the despised Bob Ewell threatens that he will kill Atticus, Atticus encourages Jem to see the world from Mr. Ewell's point of view. "Jem, see if you can stand in Bob Ewell's shoes a minute. I destroyed his last shred of credibility at that trial, if he had any to begin with. ...read more.

As Scout watches Miss Maudie's house burn down, Boo puts a blanket around her shoulders. She is horrified when she discovers what Boo has done. Here Harper Lee juxtaposes Scout's sympathetic feelings towards Miss Maudie with her disdainful feelings towards Boo even though he was only being thoughtful towards her. However, by the end of the book we can see the depth of Scout's understanding of Boo. After Bob Ewell's attack on Jem and Scout and Boo's intervention, which saves their lives, Scout's attitudes have profoundly changed. Her gentle and sensitive behaviour towards Boo at the end of the novel indicates how well she understands what it must be like to be Boo. Scout comments, "Atticus was right. One time he said you never really know a man until you stand in his shoes and walk around in them. Just standing on the Radley porch was enough." In conclusion, I think that through Atticus and Scout, Harper Lee emphasises the importance of looking at the world from other peoples' point of view in order to prevent misunderstanding and prejudice. She also emphasises the importance of being tolerant. At the end of the book Scout says, "Atticus, he was real nice." Atticus replies, "Most people are, Scout, when you finally see them." ...read more.