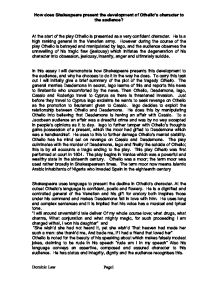 At the start of the play Othello is presented as a very confident character. He is a high ranking general in the Venetian army. However during the course of the play Othello is betrayed and manipulated by Iago, and the audience observes the unravelling of his tragic flaw (jealousy) which initiates the degeneration of his character into obsession, jealousy, insanity, anger and ultimately suicide. In this essay I will demonstrate how Shakespeare presents this development to the audience, and why he chooses to do it in the way he does. To carry this task out I will initially give a brief summary of the plot of the tragedy Othello. The general marries Desdemona in secret, Iago learns of this and reports this news to Brabantio who uncomforted by the news. Then Othello, Desdemona, Iago, Cassio and Roderigo travel to Cyprus as there is threatened invasion. Just before they travel to Cyprus Iago exclaims he wants to seek revenge on Othello as the promotion to lieutenant given to Cassio. Iago decides to exploit the relationship between Othello and Desdemona. He does this by manipulating Othello into believing that Desdemona is having an affair with Cassio. To a Jacobean audience an affair was a dreadful crime and was by no way accepted in people's opinions as it to day. Iago to further tamper with Othello's thoughts gains possession of a present, which the moor had gifted to Desdemona which was a handkerchief. ...read more.

How he reacts to Iago shows a change in his personality. There is a shift in power or a role reversal occurs. Othello becomes increasingly dependent on Iago who is controlling his thoughts. Othello's short sharp questions convey his increasing doubt and confusion regarding Desdemona. "What dost thou think?" and "why of thy thought, Iago?" Othello's questions here convey his increasing turmoil and doubt. By act 4 scene 1, Othello's character has undergone a complete transformation. He has a fit and becomes insane. Shakespeare shows this to his audience in his language. He is rambling and anxious and looses his dignity as he falls into a trance. His language shows he is confused and agitated. He repeats himself "Lie on her, lie on her and lie on her" "Confess, confess, and confess" "Handkerchief, handkerchief and handkerchief" Overall in this scene the language used by Othello gives the effect of escalating violence, increasingly aggressive and jealous thoughts conveyed through images of poison, decay, and jealousy. Othello makes his murderous intentions known "Get me some poison Iago" This is a metaphor, jealousy is a poison. Othello says of Desdemona "Let her rot, perish" Regarding his jealousy "As if there is some monster in his thoughts too hideous to be shown" This has the effect of making the audience think of danger, evil and violence. ...read more.

It is the visual, physical proof of Desdemona's infidelity for Othello, but obviously not to the audience who know the truth. The handkerchief is the dramatic device that causes Desdemona to be seen as guilty and untruthful in Othello's mind. The moor's reaction to the handkerchief falling into a trance is a good dramatic device both visually on stage and in displaying the contrast between Othello at the start of the play and Othello now. Its sudden onset would undoubtedly shock the audience. The General's incoherent would also be disturbing, indicating his change in character to the audience to someone who is jealous, insecure, unconfident, unsure and manipulated. In conclusion Shakespeare uses a variety of techniques to present the development of Othello's character in the play Othello. In particular the dramatic devices those that are visual and the use of language that chart the downfall of Othello's character from a respected general to a rambling jealous murderer who commits suicide are most effective. Shakespeare builds up tension and intrigue in the dramatic structure of the play and the intricate plot, which includes affairs, infidelity murder and betrayal would certainly have invoked an outraged response from the Jacobean audience. I feel that Shakespeare still admirably succeeds in both entertaining and possibly shocking a modern day Christian audience. How does Shakespeare present the development of Othello's character to the audience? Dominic Law Page1 ...read more.