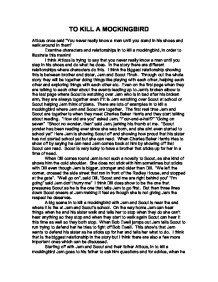 Atticus once said You never really know a man until you stand in his shoes and walk around in them - Examine characters and relationships in to kill a mockingbird, in order to illustrate this maxim!

TO KILL A MOCKINGBIRD Atticus once said "You never really know a man until you stand in his shoes and walk around in them" Examine characters and relationships in to kill a mockingbird, in order to illustrate this maxim! I think Atticus is trying to say that you never really know a man until you step in his shoes and do what he does. In the story there are different relationships where characters do this. I think the biggest relationship showing this is between brother and sister, Jem and Scout Finch. Through out the whole story they will be together doing things like playing with each other, helping each other and exploring things with each other etc. Even on the first page when they are talking to each other about the events leading up to Jem's broken elbow to the last page where Scout is watching over Jem who is in bed after his broken arm, they are always together even if it is Jem watching over Scout at school or Scout helping Jem think of plans. There are lots of examples in to kill a mockingbird where Jem and Scout are together. The first real time Jem and Scout are together is when they meet Charles Baker Harris and they start talking about reading. ...read more.

I think that is the biggest relationship in the story but I think there are also a few more important ones which can be discussed. Starting off with Jem and Scout and their father Atticus, in to kill a mockingbird Jem goes to his father to ask him questions and for advice, when he find's out that his father is representing a black man in court he is not too impressed, and feels embarrassed to go to school as the children laugh and make fun of him. But when he hears more about it he feels better about it and realises that it's his father's job. He realises that his father did not ask to do it but that who he works for chooses the cases which he does. In the story there are pieces where Atticus gives Jem and Scout advice and when Jem and Scout have there rifles which they got for Christmas they are going to use them in the garden. Atticus tells them "I'd rather you shot at tin cans in the back yard, but I know you'll go after birds. Shoot all the blue jays you want, if you can hit them, but remember it's a sin to kill a mocking bird" Another encounter between these three is when Atticus is watching over Tom Robinson at the jailhouse so they ...read more.

Tom felt he could trust Atticus. Up till the trial Atticus looks after Tom and makes sure he is not harassed by anyone. The night before the trial Atticus is lucky, as he stays by Tom's cell to make sure no one tries anything. That night Mr Cunningham and his crew come wanting to hurt Tom but luckily for Tom, Atticus is there and Scout manages to talk to Mr Cunningham and get them to leave. When the trial comes Atticus tries his hardest to prove Tom is innocent. He tries different way's and one is when he tells Bob Ewell to write some thing which he does then Atticus asks which side of the face did Mayella get hit on. Atticus makes it so that he catches out Bob. Atticus then asks Tom to come up and asks him to pickup a glass fully knowing he can't. This shows signs that it was not Tom who committed the rape but someone else. Even though Atticus proves this the Jury still finds Tom guilty of rape obviously because he is black and Bob Ewell is white. I think these are the main relationships in to kill a mockingbird, but there are also more but which are no way near as big. ...read more.