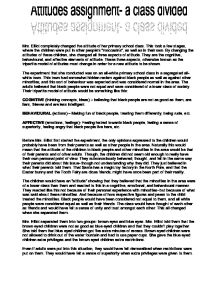 Mrs. Elliot completely changed the attitude of her primary school class. This took a few stages, where the children were put in other people's "moccasins", as well as in their own. By changing the attitudes of these children, she changed all three aspects of attitude. They are the cognitive, behavioural, and affective elements of attitude. These three aspects, otherwise known as the tripartite model of attitudes must change in order for a new attitude to be shown. The experiment that she conducted was on an all-white primary school class in a segregated all-white town. This town had somewhat hidden racism against black people as well as against other minorities, and this sort of behaviour was expected and was considered normal in the area. The adults believed that black people were not equal and were considered of a lower class of society. Their tripartite model of attitude would be something like this: COGNITIVE (thinking concepts, ideas) - believing that black people are not as good as them, are liars, thieves and are less intelligent. BEHAVIOURAL (actions) - Making fun of black people, treating them differently, being rude, etc. AFFECTIVE (emotions, feelings)- Feeling hatred towards black people, feeling a sense of superiority, feeling angry that black people live here, etc. Before Mrs. Elliot first started the experiment, the only opinions expressed to the children would probably have been from their parents as well as other people in the area. Naturally this would mean that the attitude of the children to black people and other minorities in the area would be that of their parents and of other adults. Though, the children did not seem old enough to really have their own personal point of view. They subconsciously behaved, thought, and felt in the same way their parents did about this issue- though not understanding why they did. They just believed in what their parents told them. ...read more.

You don't know what you can catch from a blue-eyed person. DAVID STOKESBERY: By nine-twenty I felt some antagonism, I'm stuck out here for twenty minutes standing waiting Man: I still say we ought to see what kind of a reaction we'd get by everyone just simply going in. Anyone who wants to do it? Woman #1: Nobody seems to have the courage in his convictions. They do a lot of talking but nobody takes any action." The blue-eyed members of the workshop were treated with disrespect. They were not treated fairly compared to the brown-eyed people. They were waiting around twenty minutes to actually get into the workshop (many standing, not sitting), and when they finally were allowed in, were told not to be late again. Throughout the entire lesson, Mrs. Elliot made it clear that blue eyed people were not equal to brown eyed people. She showed the brown eyed people that they were "rude and stupid people". "Roger: No, that's okay. I'll get a pencil and write this down directly. Jane Elliott: Look, blue-eyed people, all--many of you have pencils. Will one of you please lend him a pencil? Or don't you trust him? Which I can understand--in the last ten minutes, what have you observed about blue-eyed people? Man: Blue-eyed people are very stubborn, very self-centered, and wish to control as much of their surrounding as possible, people-wise I mean. Very inconsiderate people. I don't even know why you have them here in the first place. Jane Elliott: We have them here, because we are required to have them here. Man: We, we have to, huh? Jane Elliott: This is one of the things you have to put up with." Man: Oh." The brown eyed people were trained by Mrs. Elliot to agree with all that she said. She told them previously to pretend to believe that blue-eyed people were all that she said they were: blue-eyed people are stupid, irritating, and disrespectful. ...read more.

The gravity of being in the collar group was far stronger for a child, than an adult. Most people in the adult group seemed to understand but probably not fully believe the reasoning of Mrs. Elliot, while others thought that the discrimination was fine and you just had to ignore it. Obviously, the lady who said this did not fully comprehend what it was like to be discriminated like this and obviously worse for the rest of your life. Another problem seemed to be that the side that was not na�ve were just attacking, and not having to defend themselves. It did seem that many of them were the demographic that was being constantly discriminated- though not all. Obviously, it would have been difficult to swap the groups' roles without them realising that it was a hoax. Only few people might have changed their attitude, but the idea didn't go deep enough compared to the children. They might say it, and not actually truly believe it. It was ethical for Mrs. Elliot to conduct this experiment on primary school children. If she had not conducted the experiment, they would have ended up discriminating people just like their parents, grandparents, and great-grandparents had done before them. They were debriefed and did not become psychologically damaged by the experiment, and ended up as well-rounded individuals. It was one day of being discriminated, which then would have prevented discrimination to some of the minorities in the area. They also mentioned that they would be teaching their children not to discriminate. This means that this experiment was not a band-aid treatment, but was almost permanent. Because the experiment was conducted on children- she could swap roles easily without them doubting what she said. They felt much more gravity about the issue compared to the adults at the end of it, and had more of a sense of unity together at the end compared to the adults. At the end of the day- it was great. It made them perfectly understand discrimination, and it will forever be etched in their memories- and in ours. ...read more.