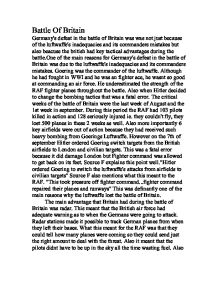 Battle Of Britain Germany's defeat in the battle of Britain was was not just because of the luftwaffe's inadequacies and its commanders mistakes but also beacuse the british had key tactical advantages during the battle.One of the main reasons for Germany's defeat in the battle of Britain was due to the luftwaffe's inadequacies and its commanders mistakes. Goering was the commander of the luftwaffe. Although he had fought in WWI and he was an fighter ace, he wasnt so good at commanding an air force. He underestimated the strength of the RAF fighter planes throughout the battle. Also when Hitler decided to change the bombing tactics that was a fatal error. The critical weeks of the battle of Britain were the last week of August and the 1st week in september. During this period the RAF had 103 pilots killed in action and 128 seriously injured ie. they couldn't fly, they lost 500 planes in these 2 weeks as well. ...read more.

Also it meant that the pilots didnt have to be up in the sky all the time wasting fuel. Also if the pilots had to be up in the sky's all the time they would have got very tired. However with it this way they could sleep then be woken up when they knew the Germans were coming. Source E mentions the advantage the RAF had over the luftwaffe due to radar. "The positions, directions and numbers of enemy planes were tracked by radar and the information was passed on to the operations controller... From here, controllers directed the fighter squadrons to attack enemy planes on target, and then guided them safely back to base" The British also had another key advantage they were fighting over their own territory. This would generally make the British pilots fight better because they are fighting for their own country. Also if any British pilots were shot down and the pilots got out safely they could be sent back into combat, however if the Germans were shot down they would be taken as POW's and couldn's be sent back up into combat. ...read more.

As we are already short of aircraft.In fact, we have to strip parts from wrecked planes in order to repair planes that can still fly. This is the observation of an RAF squadron leader, now i can't see a reason for him to have a biased point of view but all i can say is that this was not the case all over Britain. Source H however glorifies the RAF "Most of these raiders that were not destroyed were harassed all the way back to France... Hitler's invasion fleet in the channel ports has now been destroyed by the RAF... our bombers gave the invasion ports their most severe battering to date" The source is the Daily Mail Newspaper, which is descricing the success of the RAF on the previous day. This is definantly propaganda in order to improve morale on the home front. Overall i don't disagree with the interpretaion but i think that Germany's defeat in the battle of Britain was not only due to the luftwaffe's inadequacies and its commanders mistakes but also due to other things such as radar and the fact that they were fighting over Britain. ...read more.