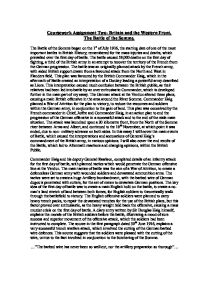 Britain and the Western Front.

Coursework Assignment Two- Britain and the Western Front. The Battle of the Somme. The Battle of the Somme began on the 1st of July 1916, the starting date of one of the most important battles in British History; remembered for the mass injuries and deaths, which prevailed over the first day of battle. The battle caused 58,000 deaths on the first day of fighting, a third of the British army in an attempt to recover the territory of the French from the German progression. The battle was an originally planned attack by the French army, with aided British support drawn from a favoured attack from the North and West in Flanders field. This plan was favoured by the British Commander Haig, which in the aftermath of Battle created an interpretation of a Donkey leading a powerful army described as Lions. This interpretation caused much confusion between the British public, as their relatives had been led into battle by an over enthusiastic Commander, which is developed further in the main part of my essay. The German attack at the Verdun altered these plans, causing a main British offensive in the area around the River Somme. Commander Haig planned a War of Attrition for the plan to victory, to reduce the resources and soldiers within the German army, in conjunction to the gain of land. This plan was conceived by the French commander in Chief, Joffre and Commander Haig, in an action plan to end the progression of the German offensive in a successful attack and to the end of the stale mate situation. ...read more.

..."It was pure bloody murder, Douglas Haig should have been hung, drawn and quartered"... This statement from a source of personal account suggests that Douglas Haig was an over-optimistic Commander at the fate of Britain's soldiers, as the first day of battle turned into a massacre of death and casualties. This source displays a primary account of a soldiers view on his personal battle on the Western Front, explaining his hatred for the casualties involved with the battle. This rational witness account is an eye witness source, as the soldier displays his views on the agreement of the Lions led by Donkeys statement. This statement suggests that the British soldiers did not believe in the British Commander, due to the hatred involved with Haig's tactics, but sources in the case of this personal view may be subjected to bias opinions, due to the death of relatives involved in the battle of the Western Front. The news reported back to the British Isles consisted of positive morale, due to the censorship of the DORA act for the control of news and reports. Media companies comprised their story material around the fact of the victorious events of battle, to successfully meet the action plan of DORA. A News of the World article produced in 1916 conveys the positive events of the battle at the Western front, illustrating the picture of success in the actual deadly military advance. The article does not include the fact of the huge massacre of soldiers on the first day of battle, in a convenient message of censorship. ...read more.

This source is a secondary source of information, as the article is taken from a present publication, which may not include relevant facts. This article displays the changing opinion of the public, as the hatred of casualties caused a first hand interpretation of blame, but over time we have analysed the facts and have observed the achievement within the battle. This article does not agree with the "Lions led by Donkey's" statement, as the article is supporting the input of Commander Haig's leadership as a positive element of the battle as more material of sources becomes available over time. In conclusion, I believe the "Lions led by Donkey's" interpretation was a valid comment to explain the devastation of battle under the leadership of Sir Douglas Haig, as the Commander planned tactics which were poorly planned due to the lives of many brought to a death due to poor leadership. The shocking figure of a 58,000 death toll on the first day of battle illustrates the severe argument of the leadership at the time of the battle, as the Commander carried out un-successful attacks on the breaching of barbed wire defences, with the written statement of a successful first day at battle within the second part of source F. ..."The battle is going very well for us and already the Germans are surrendering freely..." This is one of the opinions taken from the diary of the British Commander, which displays the un-reliable effect of the source, due to the thousands of deaths recorded. The leadership was the main factor for the loss of lives within the battle, concluding the statement to be true in my own opinion of the Battle of the Somme. ...read more.