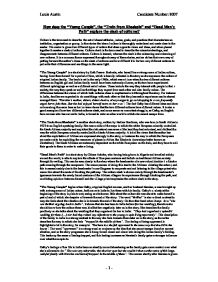 How does the "Young Couple", the "Train from Rhodesia" and "Dead Man's Path" explore the clash of cultures? Culture is the term used to describe the set of shared attitudes, values, goals, and practices that characterises an institution, organisation or group. In the stories the idea of culture is thoroughly underlined and made clear to the reader. The reader is given two different types of culture that share opposite views and ideas, and when placed together it creates a clash of cultures. Culture clash is the term used to describe the misunderstandings, and disagreements between different cultures. Culture is learned, whereas the clash is the unlearning and relearning of new cultures. It is a common theme expressed throughout many of these stories, and each has their own way of putting forward the author's ideas on the clash of cultures and how difficult it is for two very different cultures to put aside their differences and see things in the same light. "The Young Couple" is a short story by Ruth Prawer Jhabvala, who herself has a strong sense of Indian culture, having lived there herself for a period of time, which is heavily reflected in the story as she expresses the culture of a typical Indian family. The book is set in the early 1960s, which was a time when the two different cultures between an English girl and Indian family would have been extremely diverse, as the two have experienced different upbringings as well as a different set of values. These include the way they interact with people in their society, the way they speak as well as the things they expect from each other and also family values. The differences between the values of which both cultures share is emphasized a lot throughout the story. For instance in India, families are expected to do most things with each other so that the pleasurable experience can be shared amongst them: "Naraian's mother, sisters, sisters-in-law, always eager to go out shopping in a car, frequently urged her to join them. ...read more.

She had done quite a lot of things back in England.... but of course she realised that it was impossible to do anything like that here because of her, or rather the family's background and social standing. The sort of jobs this background and social standing permitted her she was not qualified to do so." This statement shows a strong culture clash in terms of what jobs people are allowed to do based on what social class you belong to. So instead Cathy has to make do with just sitting around in her flat, waiting for Naraian to come home. In England during the 1960s your family's social standing did not have as large an impact on what jobs you were allowed to take up compared to that in India. This is shown by the way in which Cathy has no choice but to remain jobless yet in England she had the chance to do numerous jobs: "She had done quite a lot of things in England, she had been a receptionist to a Harley Street specialist, a sales assistant in an airlines office, once for a brief while a waitress in a coffee bar". From this the reader gathers an insight into the way in which a particular status is upheld for an upper-class family living as part of Indian culture. The reasons why Cathy cannot get a job may appear bewildering to the reader, as it is clear to see she is willing to do so and has enough experience to get a basic job at that, and they may see this as being quite a trivial reason as to why she cannot get one. This contrasts to "Dead Men's Path", where Michael Obi is able to get a job as a headmaster of a Nigerian secondary school: "He was appointed headmaster of Ndume Central School in January 1949"and "He had sound secondary school education which designated him a 'pivotal teacher' in the official records". ...read more.

The way in which Michael speaks with the village priest makes him come across as being arrogant and having not much respect for his elders: "We cannot allow people to make a highway of our school compound". The way in which he refers to the pathway as being a "highway" may appear insulting on behalf of the village priest, who holds the pathway in such high regard, and even goes as far as to say that "the whole life of the village depends on it". Michael's lack of respect for his elders is mentioned earlier in the story in the statement: "He was outspoken in his condemnation of the narrow views of these older and often less-educated ones". However it is due to this that his school is violated after refusing to re-open the pathway to the villagers who hold it in such high regard. References to Western culture are mentioned frequently throughout the story, which includes explicit use of references by Michael's wife, Nancy, who uses words such as "modern" and "delightful". "A penny for your thoughts" is also a quotation she uses after imitating the women's magazine she is reading. Michael has a "passion for modern methods", which gives the reader the impression he does not agree with the traditional African culture in the area and this can be related to the way in which he does not stand for the pathway crossing through the school compound, as it does not follow his modern methods. Michael is also described as having a "sound secondary education, which designated him a 'pivotal teacher' in the official records". "Official records" shows Western bureaucracy- the use of too many rules and forms by officials, especially in government departments, which in this case would have been education. The point of having these references to Western culture is to emphasise the culture clash that the couple bring to Nigeria when faced with traditional African culture. ...read more.