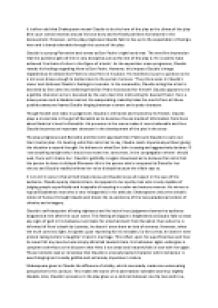 Claudio's fall from grace in Much Ado About Nothing

Transfer-Encoding: chunked ﻿It is often said that Shakespeare meant Claudio to be the hero of the play as the climax of the play (the court scene) revolves around his love story and he finally achieves his beloved in the denouement. However, as the play progresses Claudio fails to live up to the expectation of being a hero and is barely tolerable through the course of the play. Claudio is a young Florentine and serves as Don Pedro?s right hand man. The very first impression that the audience gets of him is very deceptive just as the rest of the play is. He is said to have achieved ?the feats of a lion in the figure of a lamb?. As the exposition scene progresses, Claudio reveals his feelings regarding Hero to Don Pedro. However, this impacts Claudio?s image negatively as he allows Don Pedro to woo Hero in his place. ...read more.

His presence in the scene makes it more believable and thus Claudio becomes an important character in the development of the plot in the story. The play progresses and Borachio and Don John approach Don Pedro and Claudio to carry out their master plan. On hearing, what Don John has to say, Claudio reacts impulsively without giving the situation a second thought. He believes in what Don John is saying and aggressively declares ?If I see anything tonight why I should not marry her, tomorrow, in the congregation where I should wed, there will I shame her. Claudio?s gullibility is again showcased as he believes Don John that the person he loves is disloyal Moreover this is the person who?s compared to Diana for her virtues and Claudio readily believes her to be disloyal because the villain says so. ...read more.

This reflect upon his superficial love and how he never felt any love but was simply attracted towards Hero. His behaviour again undergoes a complete volte-face as he discovers that Hero is not dead and instantly falls in love with her again. These incidents lead us to believe that Claudio is a loosely basted character who?s behaviour is everchanging and is easily gullible and extremely impulsive in nature. Shakespeare gives to Claudio the affluence of vitality, which necessarily creates an extenuating perspective for his conduct. This makes the worst of his aberrations tolerable and thus slightly likeable. Also, Claudio?s presence in the play gives us a contrast between courtly love and true, deep-rooted love. His fall from grace gives a contrast to Benedick?s character as Benedick continuously grows from being a bit of a nonsensical character as to being a man of morals and solidarity. It is Claudio?s fall from grace and Benedick?s rise to manliness that bring about the main developments in the plot during the course of the play. ...read more.