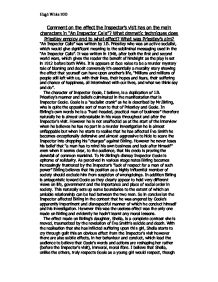 Comment on the effect the Inspector's visit has on the main characters in &quot;An Inspector Calls&quot;? What dramatic techniques does Priestley employ and to what effect? What was Priestley's aim?

Comment on the effect the Inspector's visit has on the main characters in "An Inspector Calls"? What dramatic techniques does Priestley employ and to what effect? What was Priestley's aim? "An Inspector Calls" was written by J.B. Priestley who was an active socialist, which would give significant meaning to the subliminal messaging used in the "An Inspector Calls". It was written in 1946, after both the first and second world wars, which gives the reader the benefit of hindsight as the play is set in 1912 before both WWs. It is appears at face value to be a murder mystery tale of blaming and deceit conversely it's essentially a morality story showing the effect that yourself can have upon another's life, "Millions and millions of people still left with us, with their lives, their hopes and fears, their suffering and chance of happiness, all intertwined with our lives, and what we think say and do". The character of Inspector Goole, I believe, is a duplication of J.B. Priestley's manner and beliefs culminated in the manifestation that is Inspector Goole. Goole is a "socialist crank" as he is described by Mr.Birling, who is quite the opposite sort of man to that of Priestley and Goole. In Birling's own words he is a "hard-headed, practical man of business" therefore naturally he is almost unbreakable in his ways throughout and after the Inspector's visit. ...read more.

life, however Sheila was immediately effected just by the mentioning of the Eva suicide not just when she realised that she had played a part in her Eva's suicide. To wrap I would like to explain that Sheila consistently supported the actions of the (clearly righteous) Inspector Goole, unlike her family had. This shows that she was indeed affected in a good way by his visit, as this quote highlights, "Don't you understand? If I could help her now, I would -". Also even when the matter that Goole wasn't an Inspector arises, and is proved, Sheila still retains the moral message Goole had elucidated, "Whoever that Inspector was, it was anything but a joke. You began to learn something. And now you've stopped. You're ready to go on the same old way... I'm not" this shows the length at which the Inspector's visit has affected her. Gerald Croft is the son of a competitor of Arthur Birling and is the fianc�e of Sheila. Similar to Arthur Birling, Gerald's initial response to Goole's unorthodox detective techniques is slight irritation. I feel he somewhat follows Birling's lead to bond with his, soon to be, father-in-law before showing his real feelings when it is revealed that he knew and heavily influenced Eva Smith/Daisy Renton's life. It is obvious by his reaction to her death that Daisy/Eva meant an awful lot to Gerald, he is clearly very distressed by her death as it brings back the memories of her which he probably would have tried to forget due to his engagement to Sheila. ...read more.

So in conclusion Goole has the effect on Eric that he finally realises his responsibilities in the world, the consequences of his actions and the importance of guilt and repentance. Although he knows he cannot help Eva now the Inspector's visit has convinced him to never treat anyone like that again and the value of taking into account the hopes, fears, suffering and happiness of everybody in his life. Essentially this effect is the most significant as it will last with Eric for life. "An Inspector Calls" is extremely clever and well made play this is mainly due to the fact that Priestley is so proficient at employing the massively effective dramatic techniques. For instance the entire play is set in the, perceivable ordinary, Birling dining room, which gives the audience the, underused, benefit to concentrate completely on the building of the character's relationships and personality as this vitally important in the overview of the plays dynamics. Furthermore peculiarly all six main characters are never on stage all at the same time. This creates an ignorance between not just the audience and the off stage characters but also between the off stage characters and the on stage individuals. Slowly this ignorance builds up the dramatic tension and suspense until all is revealed in a highly dramatic finale when ignorance is turned to knowledge. Dramatic irony is also in exploited in "An Inspector Calls" this can be used because of the advantage of hindsight as the play was written in 1946 but it is set in 1912. ...read more.