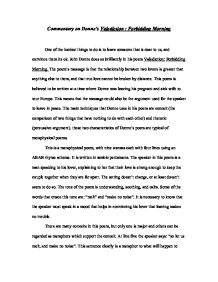 Commentary on Donne's Valediction : Forbidding Morning One of the hardest things to do is to leave someone that is dear to us, and convince them its ok. John Donne does so brilliantly in his poem Valediction: Forbidding Morning. The poem's message is that the relationship between two lovers is greater than anything else to them, and that true love cannot be broken by distance. This poem is believed to be written at a time where Donne was leaving his pregnant and sick wife to tour Europe. This means that the message could also be the argument used for the speaker to leave in peace. The main techniques that Donne uses in his poem are conceit (the comparison of two things that have nothing to do with each other) and rhetoric (persuasive argument). these two characteristics of Donne's poem are typical of metaphysical poems. This is a metaphysical poem, with nine stanzas each with four lines using an ABAB rhyme scheme. It is written in iambic pentamena. The speaker in this poem is a man speaking to his lover, explaining to her that their love is strong enough to keep the couple together when they are far apart. The setting doesn't change, or at least doesn't seem to do so. The tone of the poem is understanding, soothing, and calm. ...read more.

Now the major conceit is explained in the last three stanzas, comparing the couple in question to a compass. The first aspect to notice is that the speaker compares the woman with the fixed foot of the compass, and himself as the pencil holding part: "Thy soul, the fix'd foot, makes no show To move but doth if the other do". This part of the compass is the strong, immobile, and stable part that supports its partner (the pencil holding part). This conceit is pretty straight forward. He explains that as a compass, when the pencil holding part is far from the center, the pin holding part bends in such a way so as to support it as much as it can, in order to be able to make a perfect circle: "Like th' other foot, obliquely run ; Thy firmness makes my circle just And makes me end, where I begun." This translates in to: "no matter how far I am from you, if you support me, I will be able to surely come back." Throughout the poem conceit has been used to ease the departure of the speaker, the further one goes in to his speech the more he/she is convinced that it would be good for him to leave. This shows that conceit plays a major part in the argument that the speaker presents as well. ...read more.

he manages to get the speaker to switch the situation, making the woman feel guilty and not the man. This even comes to be relatively ironic. The future of the relationship now relies on the shoulders of the woman, as she is the strong base. If she fails to support him he will not be able to come back from where he left. The conceit and the argument work together to strengthen each other. As given with last example of how the compass conceit was used to convince the woman it was ok to separate. They do so by fitting together logically, which is another attribute to metaphysical poems. The effect of these techniques on the reader is that the reader is put in the shoes of the person the speaker is talking to. Thus one can feel like he/she is exactly inside the poem, and feels the emotion in a stronger way. By being put in the listener's shoes one is duped in to believing what the speaker is trying to convey. The message feels like an excuse to leave; yet because one is charmed by what he/she hears one cannot help but let it go. Such a discourse makes a speaker seem witty and good at debates at the same time. The speaker comes off as very intelligent and manipulative. This is so because he can support his excuse for leaving thus making his lover believe him. With such skill at arguments one could easily become the best salesman available. ...read more.