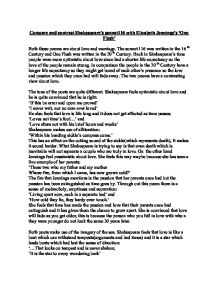 Compare and contrast Shakespeare's sonnet116 with Elizabeth Jennings's 'One Flesh' Both these poems are about love and marriage. The sonnet 116 was written in the 16th Century and One Flesh was written in the 20th Century. Back in Shakespeare's time people were more optimistic about love since had a shorter life expectancy so the love of the people remain strong. In comparison the people in the 20th Century have a longer life expectancy so they might get bored of each other's presence so the love and passion which they once had will fade away. The two poems have a contrasting view about love. The tone of the poets are quite different. Shakespeare feels optimistic about love and he is quite convinced that he is right: 'If this be error and upon me ...read more.

What Shakespeare is trying to say is that even death which is inevitable will not separate a couple who are truly in love. On the other hand Jennings feel pessimistic about love. She feels this way maybe because she has seen a live example of her parents: 'These two who my father and my mother Whose fire, from which I came, has now grown cold?' The fire that Jennings mentions is the passion that her parents once had but the passion has been extinguished as time goes by. Through out this poem there is a sense of melancholy, emptiness and separation: 'Living apart now, each in a separate bed' and 'How cold they lie, they hardy ever touch.' ...read more.

In comparison Jennings feel that love would just end up in disaster which is just like a ship wreck: 'Tossed up like flotsam from a former passion' The word flotsam means bits of things left on the sea after a ship wreck. It is a shipwreck of passion. She also feels that love is so delicate that it will be damaged. So she is trying to imply that love will not with stand tempest: '...And not wind in. And time itself 's a feather' The word feather gives the sense of delicate and soft The formation of the poems are different. Shakespeare's sonnet 116 has 14 linesd and he makes use of rhyming couplet: 1st line-'Let me not to the marriage of true minds 2nd line-Admit impediments; love is not love 3rd li8ne ...read more.