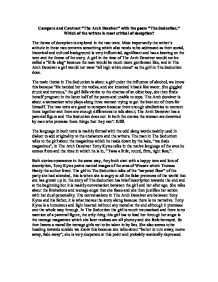 Compare and Contrast &quot;The Arch Deceiver&quot; with the poem &quot;The Seduction.&quot; Which of the writers is most critical of deception?

Compare and Contrast "The Arch Deceiver" with the poem "The Seduction." Which of the writers is most critical of deception? The theme of deception is explored in the two texts. Most importantly the writer's attitude in these two contexts something which also needs to be addressed as their social, historical and cultural background is very influential, significant and has a bearing on the tone and the theme of the story. A girl in the time of The Arch Deceiver would not be called a "little slag" because the man would be much more gentleman like, and in The Arch Deceiver a girl would not wear "all high white shoes" as the girl in The Seduction does. The main theme in The Seduction is about a girl under the influence of alcohol, we know this because "He handed her the vodka, and she knocked it back like water. She giggled drunk and nervous," the girl falls victim to the charms of an older boy, she then finds herself pregnant in the latter half of the poem and unable to cope. The Arch deceiver is about a womaniser who plays along three women trying to get the best out of them for himself. ...read more.

This is because the stories are trying to convey different messages; The Arch Deceiver is an account of humorous events in one day of a womaniser and follows in the early steps of carry on comedy. The Seduction is more serious story which attempts to create an atmosphere over and above its physical setting, phrases are used to give a message when read in between the lines such as "the frightening scum on the water" which could be many things such as the scum on the boy, or the scum on her reflection and her person or more imaginatively the natural relevance of the water being poisoned with the scum and in the girls case the vodka and the influence of the boy. They also serve as a background to the girls enthralment with the boys "eyes as blue as iodine" and "kisses that tasted of nicotine" which both symbolise contempt for the partner because the iodine used to describe his eyes is also used to treat scabs and wounds and it also stings and she feels like she will perhaps be stung but she's to drunk to much to do anything about it we know this because "her head rolled forward" and nicotine is a more sinister way of saying tobacco because his kiss could taste of either but nicotine is the killer. ...read more.

In the Tony Kytes story it is often difficult to decide who is being more manipulative, Tony or the girls. Tony seems to be in less command of the situation that any of the girls, he is continually acting on impulse. The girls however act on the intention of securing Tony for a husband. However because of women's place in society Tony has the upper hand and they must wait to be chosen. In The Seduction the power is with the boy to begin with because he knows what he wants, and that is to take advantage of a misinformed girl. Then later the girls is in control although she is the only character left in the story she knows what she wants but she doesn't know how to get it, in contrast to before when she didn't know what she wanted but knew how to get it. I think the writer in The Seduction is more critical of deception because the writer is talking on a more serious level. The girl in The Seduction truly feels betrayed and deceived, however in The Arch Deceiver Tony doesn't really mind, Unity had already made up her mind, Hannah was upset but glad to have kept her pride and Milly got her man in the end and she feels she got him over all the other ones. ...read more.