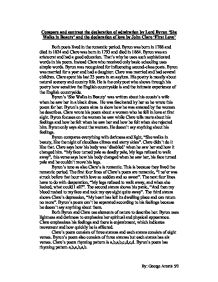 Compare and contrast the declaration of admiration by Lord Byron 'She Walks in Beauty' and the declaration of love by John Clare 'First Love' Both poets lived in the romantic period. Byron was born in 1788 and died in 1824 and Clare was born in 1793 and died in 1864. Byron was an aristocrat and had a good education. That's why he uses such sophisticated words in his poem. Instead Clare who received only basic schooling uses simple words. Byron was recognized for influencing second-class poets. Byron was married for a year and had a daughter. Clare was married and had several children. Clare spent his last 23 years in an asylum. ...read more.

Clare wrote his poem about a woman who he fell in love at first sight. Byron focuses on the woman he saw while Clare tells more about his feelings and how he felt when he saw her and how he felt when she rejected him. Byron only says about the woman. He doesn't say anything about his feelings. Byron compares everything with darkness and light, "She walks in beauty, like the night of cloudless climes and starry skies". Clare didn't do it like that. Clare says how his body was 'disabled' when he saw her and how it changed him. "My face turned pale as deadly pale, My legs refused to walk away", this verse says how his body changed when he saw her, his face turned pale and he couldn't move his legs. ...read more.

The third stanza shows Clare's depression, "My heart has left its dwelling place and can return no more". Byron's poem can't be separated according to his feelings because he doesn't say anything about them. Both Byron and Clare use elements of nature to describe her. Byron uses lightness and darkness to emphasize her spiritual and physical appearance. Clare emphasizes his feelings and there is enjambment, which indicates movement and how quickly he is affected. Clare's poem consists of three stanzas and each stanza consists of eight verses. Byron's poem also consists of three stanzas but each stanza has six verses. Clare's poem rhyming pattern is a,b,a,b,c,d,c,d. Byron's poem has rhyming pattern a,b,a,b,a,b. Both poems are very good. I personally prefer Clare's 'First Love' because he used simpler words and I can understand it much easier. By: George Arestis 5/2 ...read more.