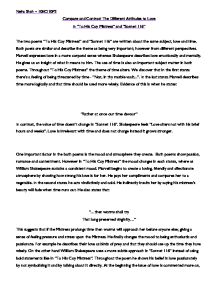 Compare and contrast the different attitudes to love in &quot;To His Coy Mistress&quot; and &quot;Sonnet 116&quot;.

Neha Shah - 10EC/10P2 Compare and Contrast The Different Attitudes to Love In "To His Coy Mistress" and "Sonnet 116" The two poems "To His Coy Mistress" and "Sonnet 116" are written about the same subject, love and time. Both poets are similar and describe the theme as being very important; however from different perspectives. Marvell expresses love in a more corporal sense whereas Shakespeare describes love emotionally and mentally. He gives us an insight of what it means to him. The use of time is also an important subject matter in both poems. Throughout "To His Coy Mistress" the theme of time alters. We discover that in the first stanza there's a feeling of being threatened by time - "Nor, in thy marble vault...". In the last stanza Marvell describes time more logically and that time should be used more wisely. Evidence of this is when he states: "Rather at once our time devour" In contrast, the value of time doesn't change in "Sonnet 116". Shakespeare feels "Love alters not with his brief hours and weeks". Love is irrelevant with time and does not change instead it grows stronger. One important factor in the both poems is the mood and atmosphere they create. ...read more.

Where as in "Sonnet 116" is written as an opinion. In Marvell's poem the verses and key words are linked to the past, present and future. The key words being "had", "but" and "now". For example the first line of the first verse states, "Had we but world enough, and time". This line is in the future tense. He questions himself asking if only there was enough time in the world. He then ends the stanza with "Nor would I love at lower rate" on line twenty which is in the present. By this he means he will not love any faster in this present time at the moment. "To His Coy Mistress" also uses rhyming couplets effectively to convey his inner feelings: "My vegetable love should grow Vaster that empires, and more slow". He uses irregular sentence lengths to create a slower pace of time. Marvell tries to create more time. In contrast Shakespeare tries to use same sentence lengths. Each line must have the same beat to create a steadier pace. He also uses a rhyming scheme. Shakespeare uses the same rhyming schemes in all his other sonnets. ...read more.

Shakespeare on the other hand expresses what love is, rather than praising a loved one. Unlike Marvell he doesn't use compliments. He makes you read between the lines and creates a more complex feeling. In conclusion I personally prefer Sonnet 116, simply because Shakespeare states his feeling about love in a more polite form and with a positive attitude. I feel that in "To His Coy Mistress" Marvell gives us an initial impression that he loves a beautiful young woman. However, as the poem develops with time, we discover that her beauty will fade parallel to Marvell's affection to her. Lust becomes more dominant over love. I think Marvell reveals a sly characteristic, in that he uses time and love to convince his Mistress that they should seize this opportunity now, but in fact he uses that to fulfil his yearning desire for his mistress. On the other hand, in "Sonnet 116" Shakespeare tries to express the truth and purity of real love. I feel that he is successful in showing this when he starts of saying if two people are committed to each other and want to be together then nothing should stop them; - "Let me not to the marriage of true minds Admit impediments. Love is not love". ...read more.