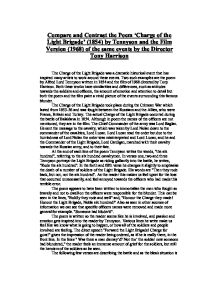 Compare and Contrast the Poem 'Charge of the Light Brigade' (1854) by Tennyson and the Film Version (1968) of the same events by the Director Tony Harrison The Charge of the Light Brigade was a dramatic historical event that has inspired many artists to work around these events. Two such examples are the poem by Alfred Lord Tennyson written in 1854 and the film of 1968 directed by Tony Harrison. Both these works have similarities and differences, such as attitudes towards the soldiers and officers, the amount of emotion and attention to detail but both the poem and the film paint a vivid picture of the events surrounding this famous blunder. The Charge of the Light Brigade took place during the Crimean War which lasted from 1853-56 and was fought between the Russians and the Allies, who were France, Britain and Turkey. The actual Charge of the Light Brigade occurred during the battle of Balaklava in 1854. Although in poem the names of the officers are not mentioned, they are in the film. The Chief Commander of the army was Lord Raglan. He sent the message to the cavalry, which was taken by Lord Nolan down to the commander of the cavalries, Lord Lucan. Lord Lucan read the order but due to the hurriedness of Lord Nolan the order was misinterpreted and Lord Lucan, and ...read more.

The poem begins with steady pace of "Half a league, half a league, half a league onward" giving an impression of horses riding along. The poem gets faster when direct speech is used, "Forward the Light Brigade! Charge for guns!" this gives the impression of the horses speeding up quite rapidly. "Cannon to the right of them, cannon to the left of them, cannon in front of them", then this line makes the reader feel like there is no hope and as if the Light Brigade is completely surrounded by the Russian artillery. Soon there is an explosion of uproar and commotion. The line, "Plunged in the battery-smoke right thro' the line they broke", gives this impression of action. Verse five is the aftermath of the battle and the retreat back through the valley and the reader is left wondering how many of the valiant cavalry were able to survive the ordeal and the fatal mistake that was made by the officers. In the film version of the Charge of the Light Brigade, the director, Tony Harrison, sets out to disparage the officers of the British army, and, like the poem, to show the heroism and bravery of the soldiers. However, unlike the poem, in the film names the officers who were responsible for the blunder, and he also includes some spectators in the film. ...read more.

Both the poem and the film show the glory of the soldiers and the mistakes of the officers. However the poem doesn't name the officers, like the film does. The film also shows more detailed emotion of the characters. The film has a more personal level to it. While the poem only speaks about people in a very general way, like, 'the Light Brigade', or 'someone had blunder'd'. This generalisation does not get across the emotion of the individuals like he film does. In the film, the main officers involved, Raglan, Lucan, Cardigan and Nolan are all named. You also get more of an idea of the officer's personalities in the film. Nolan comes across as a pushy, yet determined person. He forces Lord Raglan into making a hasty decision, and when he gives the order to Lucan, he points his arm in the general direction of the Russian army, which, because of his impatience makes Lucn take the wrong way and leads the cavalry straight to the forefront of the Russian army. In conclusion, I think that that both the poem and the film portray the gallantry of the soldiers and the mistake of the officers. I think that through the media of film, it is easier for the director to show the emotion of the individuals, although there is a certain amount of emotion that can be instilled in the reader of the poem. By Alex Chambers ...read more.