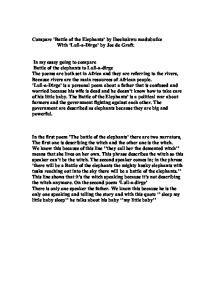 Compare Battle of the Elephants by Ihechukwu madubuike With Lull-a-Dirge by Joe de Graft.

Compare 'Battle of the Elephants' by Ihechukwu madubuike With 'Lull-a-Dirge' by Joe de Graft. In my essay going to compare Battle of the elephants to Lull-a-dirge The poems are both set in Africa and they are referring to the rivers, Because rivers are the main resources of African people. 'Lull-a-Dirge' is a personal poem about a father that is confused and worried because his wife is dead and he doesn't know how to take care of his little baby. The Battle of the Elephants' is a political war about farmers and the government fighting against each other. The government are described as elephants because they are big and powerful. ...read more.

baby ''my little baby'' In Battle of the elephants the witch is described as ''demented'' and a ''bitch'' but very powerful, By the quotes 'She can see through the eyes of the needle'. Meaning that she has very good eye vision and 'She can see the writings on the face of the cloud'. Tells us that not only can she see very well, she can also control the weather too. She lives alone in a solitary hut which is not common in Africa of you live alone Because most Africans have a large number of people in their family and help each other but the witch is on her own. The father in 'Lull-a-dirge' is an African father so alone and very confused, because he has lost his wife. ...read more.