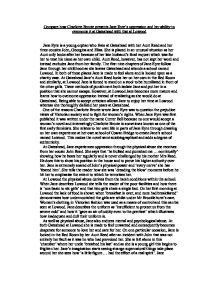 Compare how Charlotte Bronte presents Jane Eyre's oppression and her ability to overcome it at Gateshead with that at Lowood Jane Eyre is a young orphan who lives at Gateshead with her Aunt Reed and her three cousins John, Georgina and Eliza. She is placed in an unusual situation as her Aunt only looks after her because of her late husband's final request which was for her to treat his niece as her own child. Aunt Reed, however, has not kept her word and instead excludes Jane from her family. The first nine chapters of Jane Eyre follow Jane through her childhood as she leaves Gateshead and attends a school named Lowood. In both of these places Jane is made to feel alone and is looked upon as a charity case. At Gateshead Jane's Aunt Reed locks her on her own in the Red Room and similarly, at Lowood Jane is forced to stand on a stool to be humiliated in front of the other girls. These methods of punishment both isolate Jane and put her in a position that she cannot escape. However, at Lowood Jane becomes more mature and learns how to overcome oppression instead of retaliating as she would do at Gateshead. Being able to accept criticism allows Jane to enjoy her time at Lowood whereas she thoroughly disliked her years at Gateshead. One of the reasons Charlotte Bronte wrote Jane Eyre was to question the prejudice views of Victorian society and to fight for women's rights. ...read more.

Jane focuses on a 'storm beat shrub' whilst looking down on the grounds of Gateshead and this symbolises her terrible situation of being beaten by John and her separation in the house. On Jane's journey to Lowood the weather is 'misty' which creates a sense of mystery and uncertainty of what is to come. Jane constantly describes Lowood as being 'bitter cold' and this represents the lack of warmth and love around her. The two main characters responsible for Jane's suffering are Mr Brocklehurst and Aunt Reed who both warp religion in order to make Jane suffer. Aunt Reed isolates Jane from her family and her punishments go as far as locking her in the Red Room where her own husband died, something which she would not dream of doing to her own children. When Jane first says how John beats her she tells the reader how 'Aunt Reed was blind and deaf on the subject' meaning that she thinks of her son John being perfect and seems to have no idea of what he is capable of. She gives Jane no love or care and even spoils the beginning of her time at Lowood through accusing her of being a liar. The motive for Aunt Reed's cruel behaviour towards Jane is that she thinks of her as an intrusion on her 'darling' family. Also, Aunt Reed's believes Jane not to be as pretty as her own daughters and thinks of her as a poor charity case. ...read more.

She does this by comforting her after she has been on the stool and tells her that 'probably not one in the school either despises or dislikes you: many ... pity you much'. This reassures Jane that no one thinks badly of her for being accused of being a liar, but instead they feel sorry for her. This 'calmed' Jane and increases her confidence. Whilst Jane is standing on the stool, another girl smiles at her and Jane tells the reader 'how the feeling bore me up', and she stands with her 'lifted ... head', filled with pride on the stool. I think the time Jane spends standing on the stool matures her because she does not fight back injustice as she would at Gateshead, but instead stands patiently and with confidence. Charlotte Bronte uses pathetic fallacy again to show the contrast in Jane's mood after settling at Lowood. The weather changes as the 'hardships of Lowood lessened'. The quote 'snows melted' symbolises Jane finding warmth and love in a place she belongs. 'Flowers peeped out' and 'placid sunshine' pictures a bright and colourful atmosphere which reflects how Jane is feeling. In conclusion, Jane is oppressed both mentally and physically by many different characters throughout her early childhood. At Gateshead Jane reacts with anger and does not cope well with criticism and the bullying of John. However, at Lowood through the teachings of Helen and Miss Temple she turns from a fiery, passionate girl into a mature young woman with a subdued character. The love she is given at Lowood enables Jane to deal with injustice and oppression in a more effective way. ...read more.