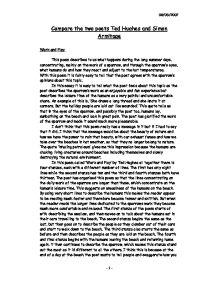 Compare the two poets Ted Hughes and Simon Armitage Work and Play: This poem describes to us what happens during the long summer days, concentrating, mainly on the work of a sparrow, and through the sparrow's eyes, what humans do and how they react and adjust to the hot temperatures. With this poem it is fairly easy to tell that the poet agrees with the sparrow's opinions about this topic. In this essay it is easy to tell what the poet feels about this topic as the poet describes the sparrow's work as an enjoyable and fun experience but describes the leisure time of the humans as a very painful and uncomfortable chore. An example of this is, 'She draws a long thread and she knots it at corners. But the holiday people are laid out like wounded.' This quote tells us that in the eyes of the sparrow, and possibly the poet too, humans lay, sunbathing on the beach and look in great pain. ...read more.

The poet has organised this poem so that the lines concentrating on the daily work of the sparrow are longer than those, which concentrate on the human's leisure time. This suggests an uneasiness of the humans on the beach. By using very short lines to describe the humans this makes the reader appear to be reading mush faster and therefore become tenser and skittish. But when the reader reads the longer lines dedicated to the sparrows work they become mush more comfortable and relaxed. The first stanza of the poem starts of with describing the swallow, and then moves on to talk about the humans sat in their cars travelling to the beach. The second stanza begins the same as the last, but then goes on to describe the people as they clamber out of their cars and start to walk down to the beach. ...read more.

As I have said before I think that this is to get us to side with the sparrow and all of nature. In this poem, the poet, Ted Hughes has used a lot of imagery including metaphors and similes. An example of a metaphor used in this poem by, the poet is 'the serpent of cars...' this is calling the long traffic jam of cars a serpent, which is a snake, and therefore saying the long line of cars looks like a snake as they move along bending around curves in the road. Another example of a metaphor in this poem is, 'A blue-dark knot of glittering voltage.' Which has been used to describe the sparrow to the reader. An example of a simile is, 'Which roll like tomatoes.' This is describing the humans on the beach as round/fat and red, burnt by the heat from hours in the sun. This simile for describing the humans is very negative, but the ones used for the sparrow are very positive. 08/05/2007 - 1 - ...read more.