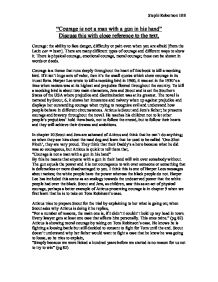 &quot;Courage is not a man with a gun in his hand&quot; Discuss this with close reference to the text.

"Courage is not a man with a gun in his hand" Discuss this with close reference to the text. Courage: the ability to face danger, difficulty or pain even when you are afraid [from the Latin cor = heart]. There are many different types of courage and different ways to show it. There is physical courage, emotional courage, moral courage; these can be shown in words or deeds. Courage is a theme that runs deeply throughout the heart of this book to kill a mocking bird. If it isn't huge acts of valor, then it's the small quotes which show courage in its truest form. Harper Lee wrote to kill a mocking bird in 1960, it was set in the 1930's a time when racism was at its highest and prejudice flowed throughout the country. To kill a mocking bird is about two main characters, Jem and Scout and is set the Southern States of the USA where prejudice and discrimination was at its greatest. The novel is narrated by Scout, 6, it shows her innocence and naivety when up against prejudice and displays her outstanding courage when trying to recognize evil and understand how people behave in different circumstances. ...read more.

Atticus knows that Tom is innocent and he believes that the truth will prevail over prejudice. This shows Atticus to be a fair, strong willed man, he is courageous to withstand against the racists and stand up for what he believes in. Telling the truth can be a courageous thing to do, sometimes it's a lot easier to lie. Tom Robinson showed amazing courage by standing up in court and telling the whole of Maycome what happened. Tom knew people would disbelieve him, yet he still got up there and defended his honour with the strongest defense ever - the truth. Mayella Ewell made an allegation that Tom Robinson raped her, whereas we no she tried to kiss him but he refused her advances. He then ran, scared of the situation, for he knew the superiority placed on white people, he knew that her word would be taken as gospel. Tom Robinson whilst up in the stand made the misdemeanor of saying, "I felt right sorry for her" (pg 203) The audience at the trial and the prosecution went wild at this remark. ...read more.

This must have been very difficult for Boo as he was institutionalised. After saving the children Mr. Tate the town sheriff decided that there was no need to penalise Boo he was not a murderer just a man who helped two innocent children. When Atticus implied this to Scout she said, "Well, it'd be sort of like shootin' a mocking-bird, wouldn't it?" (pg 282) This statement shows how Scout has grown and matured throughout the book, she understands that Boo is helpless like a child and that it would be wrong to harm him when all he has done is helped them. When it was time for Boo Radley to go home he showed courage by asking a child, Scout, to 'take him home' this is a type of courage which shows he is not afraid to ask for help, or admit to his fears; his fears of the outside world. In the last few pages when Scout has escorted Boo home she stands on the steps of the Radley porch and looks around. She now understands why Boo stays in his house, he is afraid of people of what people have turned into, he sees people's prejudices and the discrimination against others and he doesn't want to be a part of that world. Now that takes courage. Stephi Robertson 10E ...read more.