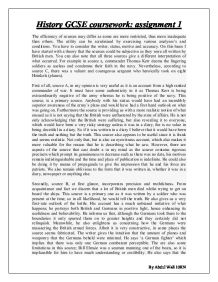 History GCSE coursework: assignment 1 The efficiency of sources may differ as some are more restricted, thus more inadequate than others. The utility can be scrutinized by exercising various analyses's and conditions. You have to consider the writer, status, motive and accuracy. On this basis I have started with a theory that the sources could be subjective as they were all written by British men. You can also note that all three sources give a different interpretation of what occurred. For example in source a, commander Thomas Kerr deems the lingering soldiers as useless and condemns their faith in the navy. Nevertheless, according to source C, there was a valiant and courageous sergeant who heroically took on eight Heinkels (planes). First of all, source A, in my opinion is very useful as it is an account from a high ranked commander of war. It must have some authenticity in it as Thomas Kerr is being extraordinarily negative of the army whereas he is being positive of the navy. ...read more.

This source is a primary one as it was written by a soldier who was present at the time, so in all likelihood, he would tell the truth. He also gives us a very first-rate outlook of the battle. His account has a much unbiased initiative of what happens; he portrays both British and Germans in positive light, hence enhancing its usefulness and believability. He informs us that, although the Germans took them to the boundaries it only spurred them on to greater heights and they certainly did not relinquish. Meanwhile, he also enlightens us concerning how the Germans were massacring the British armed forces. Albeit it is very constructive, in some places the source seems fabricated. The writer gives the intuition that the amount of planes and weaponry that the Germans beheld were minimal. He says 'a German fighter' which implies that there was only one German combatant perceptible. The are also some limitations in this source; Bill Elmsie was a seaman manning one of the boats, so it is implausible for him to have much understanding or credibility. ...read more.

None of the sources give us a date, when or where it was published nor do they enlighten us on the foundations of this epic battle which leads me to believe that they are incompetent. They also only comprise of British viewpoints, hence it would have been very accommodating to have French or German adaptations to collaborate what these sources are saying. Irrespective of whether the sources were authentic or not, they were all based on personal opinion rather than fact. In my opinion source A is without doubt the most useful as it told us about more of the battle than any of the others and due to the fact that it was written by a commander, who gave us a more realistic account and must have had more knowledge of the battle than the other authors. In contrast, I believe that source C was evidently the least useful, as it seems particularly fictional, it is severely limited and gives a much fantasised version of what really took place. ?? ?? ?? ?? By Abdul Wali 10RN ...read more.