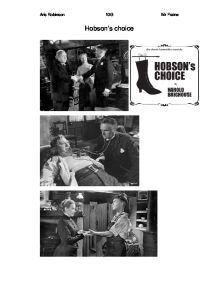 Demonstrate, in detail, how the writer uses language effectively to represent Maggies character and role in act one of Hobsons Choice.

Hobson's choice Demonstrate, in detail, how the writer uses language effectively to represent Maggie's character and role in act one of "Hobson's Choice." Hobson's choice The play is set in Salford in 1880. The year is a very important thing in the play because some characters are not fit for what time they are in because women were often thought of as lower class because they could not work to earn money. Maggie is an example of this. In 1880 women were not usually able to tell people what to do but Maggie often uses imperatives to order people about. Men would think it was foolish to listen to a woman; many men those days would even think that women were inferior to men so are unable to work or vote. In the play Maggie immediately takes control of situations with ease. The other main characters in the play are Hobson, Willie, Vicky and Alice. Alice, who is twenty one and Vicky, who is twenty three are Maggie's younger sisters. Maggie, who is thirty, is the eldest daughter of Hobson. At the start of act one Maggie is already showing her character. As soon as Maggie enters the shop she is working with an account book while her sisters are reading and knitting this show that Maggie is a hard worker and always wants to work to get the job done to move on and do something else, this shows she is determined to work quickly and efficiently. Maggie also shows she knows a lot about the family life. Vicky said "Has he had breakfast yet, Maggie?" (He meaning Hobson,) Maggie replies, "Breakfast! With a masons' meeting last night?" Maggie replies like Vicky should know the answer automatically. When Albert Prosser enters the shop Maggie "rises." This could be symbolic of her rising to a challenge. Maggie is formal to Albert calling him "Mr Prosser." ...read more.

Maggie tells Willie, "You're a natural born Genius at making boots." Maggie is telling him about how talented he is which shows her nice side but in the same sentence she said "You're a natural fool at all else." Maggie can be nice to him and insult him with no thinking, she doesn't even notice that she insulted him. This may be because she speaks her mind and she just thought it was true. Willies life is ruled by fear because he won't move to a better shoe shop because he fears the fine places, Maggie wants to help him to give him the confidence to be able to go into a better shop, and she is the liberator that wants to help all including her. Willie tells Maggie that she is a wonder in the shop, this may be because Maggie complimented him earlier or he was telling the truth and thinking on the same wavelength as Maggie for a second. As Willie dives to the trap Maggie stops him, this could be symbolic that Maggie is getting him out of Hobson's trap but he is now trapped with Maggie, this is worse because Maggie is a lot cleverer than Hobson and also a lot more demanding. Maggie steps out of the stereotype of women when she asks Willie to marry her. This shows how Maggie is a woman out of her time she is too demanding and can't wait until someone else does it so she has to do it, this shows she is very brave and can do things without thinking of the consequences. Maggie knows this is her last chance to get out because life is so scarce she needs this chance. Willie is worried about what Hobson will say, he is too frightened to hurt someone. This also shows how again he is living in fear, Maggie has brought back the fear because she has put him in an strange situation. ...read more.

Willie also says "It's like an 'appy dream." Willie says this because he now realises that this is his chance to escape through Maggie, which she has been trying to tell him, he will be getting away of Hobson and Ada's mum which will help him move closer to work in a place worthy of him. Alice acts very snobbish saying she won't have Willie as a brother in law which Maggie ignores, nothing will stop Maggie now unless she dropped dead she has all the things she wanted so she is going to craft something ideal out of them. Later in the play Maggie thinks Albert is very vain because he used hair cream and he always worries about what he looks like, Maggie hates this because she is a person that likes to be plain and down to earth. This also tells us that Maggie is judgemental over people because of how quick he judged him on using hair cream and not getting to know him better. To my conclusion I think that Maggie is a woman out of her time, a woman with great power and mind. If Maggie was any different in the play there would be no play. Maggie is a character that is one of a kind she is determined to so anything she wants without fail and no one can convince her not to do what she wants. She is the most important character of the play she brings all the characters together using her own cunning mind to plan out a way to help everyone she wants to help and also herself. She is a woman that has no fear, which she uses to do anything she wants. She is a woman of stone, she is nearly untouchable, the only time when I think she was genuinely hurt was when her own father said she wasn't able to marry because she was too old, I think she was hurt but it doesn't mean she was because she didn't show any signs of being hurt. ?? ?? ?? ?? Aris Robinson 10G Mr Fraine ...read more.