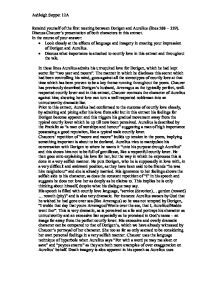 Remind yourself of the first meeting between Dorigen and Aurelius (lines 288 - 339). Discuss Chaucer's presentation of both characters in this extract. In the course of your answer: * Look closely at the effects of language and imagery in creating your impression of Dorigen and Aurelius. * Discuss what importance is attached to courtly love in this extract and throughout the tale. In these lines Aurelius admits his unrequited love for Dorigen, which he had kept secret for "two yeer and moore". The manner in which he discloses this secret which had been controlling his mind, goes against all the stereotypes of courtly love at that time which has been proven to be a key theme running throughout the poem. Chaucer has previsouly described Dorigen's husband, Arveragus as the typically perfect, well-respected courtly lover and in this extract, Chaucer contrasts the character of Aurelius against him; showing how love can turn a well respected nobleman into an untrustworthy dramatic liar. Prior to this extract, Aurelius had conformed to the customs of courtly love closely, by admiring and pining after his love from afar but in this extract his feelings for Dorigen become apparent and this triggers his gradual movement away from the typical courtly lover which he up till now been perceived. Aurelius is described by the Franklin as "a man of worshipe and honour" suggesting a man of high importance possessing a good reputation, like a typical male courtly lover. ...read more.

Death imagery is alos apparent in his speech as Aurelius uses language such as "sleen...grave...do me deye", this also shows his over dramatic nature. As his character is not believable, this draws yet again on the reoccurring theme of truth vs. illusion within the poem. Aurelius' repetition of "God" emphasises religion, which was very important in Chaucer's time, and also suggests his comparison of Dorigen to a deity. The way in which he begs her for mercy "have mercy, sweete" also shows this. After Aurelius' hyperbole-filled declaration to Dorigen, "she gan to looke upon" him, suggesting her shock to what she just heard and her naivety and innocence. Her distorted and broken up dialogue reiterates this point, as Chaucer repeatedly interrupts her with "quod she". The language Dorigen next speaks ironically contradicts what she wants Aurelius to believe. For example, she states how she wishes he had not informed her of his love and swears in God's name she will never be unfaithful to her husband "By thilke God that yaf me soule and lyf//Ne shal I nevere been untrewe wyf". The fact that this time she is the one that swears on religion is ironic as it was Aurelius who had previously, and both swore on very different things. Never the less, Dorigen still refers to Aurelius as "Aurelie", which can be perceived in either a flirty way or just a nickname she has got for a close friend. ...read more.

The theme of play within the noblemen and women carries on the stereotypes that Dorigen is a typical female courtly lover. Following this, Dorigen's tone turns more sinister as she patronises Aurelius, almost talking to him as a child by describing his heart full of "folies". She is questioning the decency in his character and his friendship with her. Their confrontation with one another ends on bad terms, with Aurelius concluding in his typical melodramatic tone, that he will die a death "doth horrible". Although Aurelius argues throughout this extract that he will do anything for Dorigen, the readers do not believe him and think he is being increasingly insincere; this does not follow the idealised pattern of courtly love, as he loses people's respect for himself which at the beginning of the extract he claimed to posses a vast amount of. By making his character less likeable, he is subconsciously doing what he is so desperately trying not to and his initial plan of trying to manipulate the conversation to find the best time to tell Dorigen of his love for her, failed miserably. This is shown by his miserable and bitter imagery in the closing lines; "Aurelius ful ofte soore siketh". Chaucer develops both characters within these lines further, giving them both individuality by moving them away from their previous stereotypes, this makes them more interesting and unpredictable, thus reflecting on the poem as a whole. ?? ?? ?? ?? Ashleigh Soppet 12A ...read more.