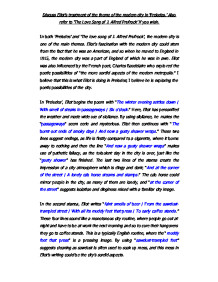 Discuss Eliot's treatment of the theme ofthe modern city in 'Preludes.' Also refer to 'The Love Song of J. AlfredPrufrock' if you wish.

Discuss Eliot's treatment of the theme of the modern city in 'Preludes.' Also refer to 'The Love Song of J. Alfred Prufrock' if you wish. In both 'Preludes' and 'The love song of J. Alfred Prufrock', the modern city is one of the main themes. Eliot's fascination with the modern city could stem from the fact that he was an American, and so when he moved to England in 1915, the modern city was a part of England of which he was in awe. Eliot was also influenced by the French poet, Charles Baudelaire who explored the poetic possibilities of "the more sordid aspects of the modern metropolis." I believe that this is what Eliot is doing in Preludes; I believe he is exploring the poetic possibilities of the city. In 'Preludes', Eliot begins the poem with "The winter evening settles down / With smell of steaks in passageways / Six o'clock." Here, Eliot has personified the weather and made wide use of sibilance. By using sibilance, he makes the "passageways" seem eerie and mysterious. Eliot then continues with "The burnt-out ends of smoky days / And now a gusty shower wraps." ...read more.

Eliot starts the stanza with "You tossed a blanket from the bed / You lay upon your back, and waited." These two lines are of a sexual nature and we almost get the impression that Eliot is talking about a prostitute. We must also notice that this stanza is also written in the second person, which is more personal than the other stanzas. In the next few lines it seems as if the narrator feels pity for the woman as she has sold her soul and can see exactly what she has done when she sees the flickering images. "The thousand sordid images / Of which your soul was constituted; / They flickered against the ceiling." These few lines could stem from the beliefs of Henri Bergson, a French philosopher who influenced Eliot. Bergson believed that the soul was formed by memories of images projected onto the passive mind as film. At the end of the third stanza, we see a technique common to Eliot's writing, focusing on body parts; "You curled the papers from your hair, / Or clasped the yellow soles of feet / In the palms of both soiled hands." ...read more.

The imagery of "wipe your hand across your mouth, and laugh" is vulgar and provokes images of dirty people laughing in dark back streets of the city, which is a threatening image. The sounds of the words are harsh; "wipe..hand..laugh" mirroring the harsh world which the city is. "The worlds revolve..." suggests that in cities people are living in their own different worlds, behind "masquerades", which is a theme also present in 'The Love Song of J. Alfred Prufrock' with the line "To prepare a face to meet the faces that you meet." In 'Preludes' and 'The Love Song of J. Alfred Prufrock', Eliot illuminates the modern city in a very harsh light. Eliot seems to focus on the negative points of the city such as its darkness, loneliness and how threatening it can be. This could be due to the fact that Eliot was writing about these city themes after Darwinism, and just before World War One, when the city and civilisation were seen as the things which would eventually destroy man. Eliot discusses the theme of the modern city truthfully and writes about it in the stark way in which he views it. Becky Harris 12G2 (1,152 words) ...read more.