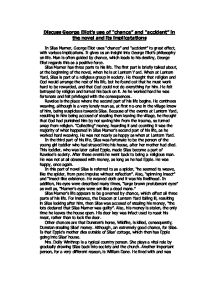 Discuss George Eliot's use of "chance" and "accident" in the novel and its implicatations In Silas Marner, George Eliot uses "chance" and "accident" to great effect, with various implications. It gives us an insight into George Eliot's philosophy on life. Man is often guided by chance, which leads to his destiny, George Eliot regards this as a positive force. Silas Marner has three parts to his life. The first part is briefly talked about, at the beginning of the novel, when he is at Lantern Yard. When at Lantern Yard, Silas is part of a religious group in society. He thought that religion and God would arrange the rest of his life, but he found out that he must work hard to be rewarded, and that God could not do everything for him. He felt betrayed by religion and turned his back on it. As he worked hard he was fortunate and felt privileged with the consequences. Raveloe is the place where the second part of his life begins. ...read more.

Also, his money is stolen, the only time he leaves the house open. His door key was infact used to roast his meat, rather than to lock the door. Other chances are that Dunsten's horse, Wildfire, is killed, consequently, Dunstan stealing Silas' money. Although, an extremely good chance, for Silas. Is that Eppie's mother dies outside of Silas' cottage, which then has Eppie going into Silas' house. Mrs. Dolly Winthrop is a typical country person. She plays a vital role by gradually drawing Silas back into society and the church. Another important person, for a very different reason, is William Dane. He lived with and was friends with Silas although got him (thrown out) of Lantern Yard. This is because he was a crafty, cunning man who only pretended to be friends, using Silas. Godfrey Cass is the Squire Cass', the wealthiest man in Raveloe, son. For Godfrey, money does not bring him happiness. He leads a double life as he pushes a-side important issues, wanting them to be resolved by themselves. ...read more.

Godfrey learns to do the right thing, doing his duty, by the end of this novel. Dolly Winthrop has high standards about behaviour. William Dane was devious and a traitor towards Silas, although Silas was 'rewarded' in the end. Dunsey steals Silas' gold then consequently dies. Godfrey 'lies' and does not 'own up' so consequently does not get Eppie. Whereas, Silas works hard and does nothing wrong, the consequence of this is that he gets Eppie. Also, Dolly and Aaron Winthrop lead a pleasant life joining Silas' happy life. Eppie's mother dies outside, at night, in the darkness. Then Eppie goes into Silas' cottage filling it with light, more than the gold. Lantern Yard is dark, when Silas is accused of stealing the money, with the drawing of the lots deciding the verdict. In contrast, Raveloe is light. There is lots of light at the end of the 'fairy tale ending', especially when Eppie and Aaron Winthrop get married. 'Silas Marner' is a fairy tale as there are "goodies" and "badies", who get what they deserve in the end. This is a novel about a chain of events and their consequences... ...read more.