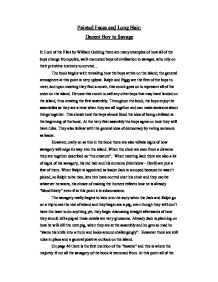 Discuss How On The Island, The Boys Return To A State Of Barbarianism

Painted Faces and Long Hair: Decent Boy to Savage In Lord of the Flies by William Golding there are many examples of how all of the boys change from polite, well-mannered boys of civilisation to savages, who rely on their primitive instincts to survive... The book begins with revealing how the boys arrive on the island; the general atmosphere at this point is very upbeat. Ralph and Piggy are the first of the boys to meet, and upon meeting they find a conch, this conch goes on to represent all of the order on the island. He uses this conch to call any other boys that may have landed on the island, thus creating the first assembly. Throughout the book, the boys enjoy the assemblies as they are a time when they are all together and can make decisions about things together. This shows how the boys almost liked the idea of being civilized at the beginning of the book. At the very first assembly the boys agree on how they will have rules. ...read more.

At this point all of the sense of order and optimism on the island ends. Even at the mention of the beast Ralph tries to make the young boy feel better with rationalisation whereas Jack uses violence when talking of the beast "if there was a snake-thing we'd hunt it and kill it". Throughout the book there are many signs of how each of the boys react to the ever decreasing stability of rules on the island. Ralph wishes for the rules to return and for them to continue with the fire in hope of being rescued, Piggy wants to be safe and have protection whilst also wanting to be comforted, Simon being the prophetical one is very curious about it all especially the beast and Jack doesn't care for the rules as long as he can have the fun of hunting with his hunters. His death is very symbolical, representing how they have now became out of control and are rejecting truth and reason. ...read more.

Despite all of the savagery that erupts throughout the book as soon as the officer appears Jack and all of his tribe members all return to "normal". They are now being described through the officer's eyes which can only see the boys with "filthy bodies, matted hairs and unwiped noses". The officer remarks on how he would have thought better from British boys, thinking that they were only playing a game, even though he is unaware of two murders that have just happened and one that was just avoided by his presence on the island. I also see irony in the fact of how they are leaving their own mini war on this island just to be greeted by an even larger one waging between the adults o the outside world of the island. I think this book shows that civilization and savagery are closer linked than most would think. An example of this is how the civilized officer who saves the boys from the island, is part of the adult world where savagery and civilization almost go hand in hand. ...read more.

This answer is quite confusingly marked as only achieving a D grade for GCSE, yet it appear to me a much more substantially confident and well-written response than something I would expect to achieve a D grade. This candidate should ...

This answer is quite confusingly marked as only achieving a D grade for GCSE, yet it appear to me a much more substantially confident and well-written response than something I would expect to achieve a D grade. This candidate should be looking to receive a middle B grade for their efforts here. They respond well to the task, even if the structure of the essay could do with being a little more refined in order to make the focus on the question more apparent. The difficulty here is that the candidate has chosen to answer the question almost chronologically (as it is the only way) and so this makes them obliged to comment on even the smallest details that don't necessarily suit the question. However, this is not a big problem as , even after factoring out the irrelevant analysis, there is still a very strong response present here that documents a number of important scenes from Golding's novel and analyses them well.

The Level of Analysis here is good. There is a sound interpretation of what Golding was trying to achieve with this allegory and the candidate closes the analysis well by recognising the inextricable link between civilisation and savagery. With this in mind though, I think the candidate's expression of what they actually know doesn't show through quite so well. Civilisation and savagery are not simply linked - they are inversely linked meaning as one degrades the other strengthens. The deciding factor is of course, the presence of social attitudes and authority figures and this needs to be more specifically commented on.
Elsewhere, the candidate makes a good use of analytical techniques, commenting on how the characters and how they interact with each other and different points in the play, showing the reactions to the degradation of society. Perhaps more emphasis on the character of Simon and how he reacts (all that gets mentioned with regard to Simon is that he is "prophetical (sic)", yet his death is a key moment (just as much as the revelation that Jack and the choir coat themselves in paint) in the triggering of savagery amongst the other boys. The candidate does however do well in mentioning that some of the boys have nuances of savagery about them before they spend long on the island. Jack and Roger being the two named characters of such description show signs of cruelty and bloodthirst even with apparent adherence to society, hence why, as the candidate correctly identifies, Roger threw stones that
"aimed to miss".

The Quality of Written Communication is very good. Being an analytical response, there is no pressure to use overly complex sentences structures or descriptive vocabulary but there is a need for clarity and precision. In terms of language used, the candidate makes a good handling of the English language and the standards required when analysing novels.