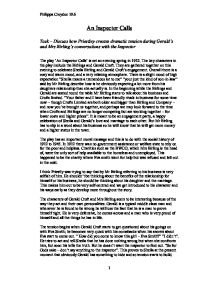 An Inspector Calls Task - Discuss how Priestley creates dramatic tension during Gerald's and Mrs Birling's conversations with the Inspector The play 'An Inspector Calls' is set an evening spring in 1912. The key characters in the play include the Birlings and Gerald Croft. They are gathered together on this evening to celebrate Sheila Birling and Gerald Croft's engagement. Overall there is a cosy and warm mood, and a very relaxing atmosphere. There is a slight mood of high expectation "Sheila means a tremendous lot to me" "your just the kind of son-in-law" said by Mr Birling describe how is he obviously expecting a lot more from his daughters relationship than she actually is. In the beginning while the Birlings and Gerald are seated round the table Mr Birling starts to talk about his business and Crofts limited. "Your father and I have been friendly rivals in business for some time now - though Crofts Limited are both older and bigger than Birling and Company - and now you've brought us together, and perhaps we may look forward to the time when Crofts and Birlings are no longer competing but are working together - for lower costs and higher prices". It is meant to be an engagement party, a happy celebration of Sheila and Gerald's love and marriage to each other. But Mr Birling has to slip in a word about his business so he will know that he will get more money and a higher status in the town. The play has an important moral message and this is to do with the social history of 1912 to 1945. In 1912 there was no government assistance or welfare state to rely on for the poor and helpless. Charities such as the BWCO, which Mrs Birling is the head of, were the only sort of help available to the homeless and unemployed. This happened to be the charity where Eva smith went for help but was refused and left out in the cold. ...read more.

They both act very calm and respect each other, but when he really starts to question her, he becomes very overwhelming towards Mrs Birling "I think you did something terribly wrong - and your going to spend the rest of your life regretting it. I wish you could have been with me tonight in the infirmary. You'd have seen" He is trying to make Mrs Birling confess to her involvement and he tries doing this by making her feel guilty. But Mrs Birling was still strong and didn't let this get to her, she replied by showing she wasn't bothered by Eva Smiths death and believed it was no-one but the father of the child that the girl was expecting fault. This tells us that it is not all lower classes that do things wrong and get involved with the police, middle classes do things wrong. They get involved in the wrong things and sometimes act like lower classes. They sleep around and steal. The other characters are all treated in the same way as Mrs Birling and Gerald. Gerald is very rude and he acts quite nasty to them all. Shelia is very hysterical about the questioning, she gets very upset by the Inspector keep bringing up that Eva has died "Don't please - I know, I know - and I cant stop thinking about it". Mr Birling however gets very angry and distressed with the Inspectors rudeness, the Inspector also gives out orders which go against Mr Birlings wishes, in his own house. Eric says " could I have a drink first" Mr Birling "NO" Inspector "yes". He is clearly going against Mr Birlings wishes and is trying to intimidate him. When the Inspector is questioning Eric he acts nice and ok about everything, telling him he can have a drink against his fathers wishes, but when the inquiry starts getting underway his asks Eric lots of questions, Eric responds calmly and understandingly and answers all the questions the Inspectors asks. ...read more.

At some points he becomes distressed with what's going on but soon revives herself. She keeps the same tone over her interrogation although being asked more questions in a more angry tone by the inspector. She manages not to let the inspector get the better of her. The audience learns that Mrs Birling may be the head of a charity, which helps lower classes, but this doesn't make her a better person. She refuses Eva simply because she was prejudiced at the beginning. The thing that makes these two characters so intresting to watch is the fact that they seem to bring a lot to the story line. Mrs Birling is the last of them to be involved with Eva, but she is almost one of the ones who were most horrible to her. Some would say she was the cause of Eva deaths, but others would say it was bound to happen. Whereas Gerald was the only one who showed her compassion and love. He cared about her and gave her food and a place to stay, but soon over time he to kicked her out in the cold. His actions bring to the play the whole Sheila and Gerald 'will they wont they' dilemma. The audience want to know what will happen with both of them, will they still be engaged or will the break? I think Priestly's moral message to the audience is that it doesn't matter how lower class a person is, they have a heart and feelings unlike anybody else, and you should think of this before you treat them in any way different to yourself. Also the moral message is that not only the lower class behave in a certain way, the middle class do to, middle class people behave in the same manor that the lower class people do. For example, Alderman Meggarty. The middle class had poor behaviour which shows through this man, he is a womaniser and is meant to be a respected person of the town but he soon turns out to be the opposite. Philippa Croydon 10.6 1 ...read more.