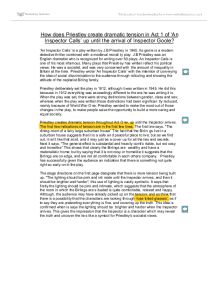 How does Priestley create dramatic tension in Act 1 of An Inspector Calls up until the arrival of Inspector Goole?

How does Priestley create dramatic tension in Act 1 of 'An Inspector Calls' up until the arrival of Inspector Goole? 'An Inspector Calls' is a play written by J.B Priestley in 1945. Its genre is a modern detective thriller combined with a medieval morality play. J.B Priestley was an English dramatist who is recognized for writing over 50 plays; An Inspector Calls is one of his most infamous. Many plays that Priestley has written reflect his political views. He was a socialist, and was very concerned with the amount of inequality in Britain at the time. Priestley wrote 'An Inspector Calls' with the intention of conveying the idea of social discrimination to the audience through ridiculing and showing the attitude of the capitalist Birling family. Priestley deliberately set the play in 1912, although it was written in 1945. He did this because in 1912 everything was exceedingly different to the era he was writing it in. When the play was set, there were strong distinctions between gender, class and s*x; whereas when the play was written those distinctions had been significantly reduced, mainly because of World War One. Priestley wanted to make the most out of those changes in the play, to make people seize the opportunity to build a more caring and equal society. Priestley creates dramatic tension throughout Act One, up until the Inspector arrives. The first few indications of tension are in the first few lines. ...read more.

As if rather than celebrating the engagement of Gerald and Mr Birlings daughter, Sheila, he is celebrating the merge of Mr Birlings and Gerald's fathers businesses, which shows what a selfish character Mr Birling is. This also creates tension because it is plainly obvious that not all the family are enjoying the celebration for the same or right reason. The distinction of social class and inequality is shown when Mr Birling says, "Well, well - this is very nice. Very nice. Good dinner too, Sybil. Tell cook from me". The cook is clearly from a lower class yet Mr Birling is telling his wife to thank him for the dinner; this seems normal and polite in present day but remembering that the play is set in 1912, it would have been exceptionally unusual. This is shown when later on his wife says, "Arthur, you're not supposed to say such things" It is evident that Mrs Birling is much more bothered about social class than Mr Birling; this may have been because Mr Birling has not always been in the company of higher class people, whereas Mrs Birling was born into this kind of society. This creates tension because the Birling family are clearly not comfortable with each other's mannerisms and behaviour. In the play Mr Birling calls Bernard Shaw and H.G Wells 'cranks' because they believed in social justice. Shaw and Wells were both authors that believed in socialism. ...read more.

Just before Eric enters the room Mr Birling says, "And you can promise her that we'll try to keep out of trouble during the next few months" This is very symbolic because it is suggesting that Eric has been getting into trouble, which is later to be revealed that he has. When the inspector is first mentioned at being at the front door the atmosphere changes completely. You can tell that everyone is getting nervous and suspicious. This shows when Gerald jokingly accuses Eric of being up to something and Eric says, "Here what do you mean?" Here he is getting defensive and protective of himself; as if he has something to hide. Mr Birling picks up on this and asks him, "What's the matter with you?" in a sharp, assertive manner. In conclusion, I think that Priestley has built up tension very successfully. He has set a perfect environment for the Inspector to arrive in. There are many techniques that are used to contribute to the tension built in the play. In my opinion; the characters actions build the tension best by the way they are seated and what they are wearing. This is because I think that this is where the distance and formality is most evident. My favourite dramatic device used in the play is foreshadowing; this is because Priestley is giving away subtle indications of what is going to happen as the play goes on. I couldn't pick the most effective way Priestley creates tension, as they all work together to build tension in the best possible way. ...read more.

Shows some understanding of the techniques Priestley uses to build dramatic tension but a lot of details missed on the characters, the language, and the irony. ***