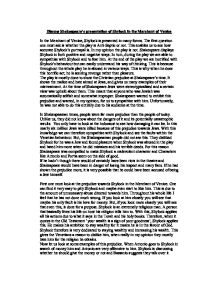 Discuss Shakespeare&amp;#146;s presentation of Shylock in the Merchant of Venice

Discuss Shakespeare's presentation of Shylock in the Merchant of Venice In the Merchant of Venice, Shylock is presented in many forms. The first question one must ask is whether the play is Anti-Septic or not. This enables us to see how accurate Shylock's portrayal is. In my opinion the play is not. Shakespeare displays Shylock in both positive and negative ways. In turn, during the play we are able to sympathise with Shylock and to fear him. At the end of the play we are horrified with Shylock's behaviour but can easily understand his way of thinking. This is because throughout the whole play he is abused in various ways. This is why when he does this horrific act; he is seeking revenge rather than pleasure. The play is mostly done to show the Christian prejudice at Shakespeare's time. It shows the malice and hate aimed at Jews, and gives us many examples of their mistreatment. At the time of Shakespeare Jews were stereotypicalised and a certain view was upheld about them. This meant that anyone who was Jewish was automatically selfish and somewhat improper. Shakespeare wanted to exhibit this prejudice and wanted, in my opinion, for us to sympathise with him. Unfortunately, he was not able to do this entirely due to his audience at the time. In Shakespearean times, people were far more prejudice than the people of today. Unlike us, they did not know about the dangers of it and its potentially catastrophic results. You only have to look at the holocaust to see how damaging it can be. In this nearly six million Jews were killed because of this prejudice towards Jews. With this knowledge we can therefore sympathise with Shylock and see the faults within the Venetian behaviour. But, the Shakespearean people did not see this. They disliked Shylock for he was a Jew and found pleasure when Shylock was abused in the play and hated him more when he did mistakes and his terrible deeds. ...read more.

This deeply wounds Shylock, showing he is an emotional man with feelings. The ring was given to him by his wife. She meant a much to him as well as the ring. Jessica knew this yet still sold it. It proves how maybe money is not all that matters to Shylock. On the other hand though Shylock's extreme actions and the hate shown towards him make you wonder how good a man he really is. It makes you question Shylock's personality and whether one should try and understand him or not. For example, the fact that his own daughter hates and despises him questions his goodness and whether one should sympathise with him or not. Jessica cannot bear living with Shylock and even goes as far as saying he is 'a merry devil'. How good can a man be if his daughter hates him and is saying such horrific things about him? As soon as Shylock leaves the house she disobeys all his orders and runs off with Lorenzo whilst stealing many ducats. When Shylock returns though he is very disappointed with Jessica but somewhat more with the fact that she stole from him. His remarks give you a sense that he cares more for the money. When he is speaking to Tubal he speaks a lot more about the money he lost rather than his daughter. Tubal is sent by Shylock to retrieve Jessica and when he returns without her Shylock is unhappy because of the money he lost rather than his daughter. 'A diamond gone, cost me two thousand ducats in Frankfurt!' You must ask yourself does Shylock love money more than even his daughter or is he too passionate towards his religion? What's more Tubal also brings back news that Antonio's ships have been 'cast away'. Shylock becomes emphatic with joy. The fact that the ships will not return means that Antonio cannot pay him back. Therefore because of his bond, Shylock can take his pound of flesh and hurt Antonio. ...read more.

She reads from the Venetian script and reads out that if 'thou shed one drop of Christian blood' he will be punished. Here the law is being used against him, as he is a Jew. The law even states one may not drop a jot of Christian blood, no Jewish. Even the Venetian law is prejudice. The law is weighted with religious bias. It is as if Being Jewish declines one of all ones rights. The law now is being used against Shylock rather than with. He has relied on it throughout the trial but now it is his enemy. He then decides to take the money instead in fear of losing his possessions but Portia tells him he must take the bond. In the end he does not take Antonio's flesh or the money but that is not all. The law states that if an outsider were to attempt to kill someone half their possessions would go to the state and the other to the person they attempted to kill. In this situation he is labelled an alien due to his religion. Now is the crucial point. Since the Christians had begged so much for mercy shouldn't they show it now? They do not though and Instead Antonio gives him another choice. It is that half the money should go to Portia and so should the other when he dies. Not only this but he must convert to Christianity. He is forced to take this offer and reaches complete public humiliation. Gratiano even makes him kiss the cross and the broken man has just shattered. One point one must think about though is the amount of mercy the Christians showed. Do you think what they have done is fair or are they just hypocrites? As a conclusion, Shakespeare in my view has put the whole Jewish society in this one man Shylock. He is trying to manifest the idea of Jews being prejudice against. I some places he is unable to do this because of his audience but overall that is the point he is trying to raise. ...read more.