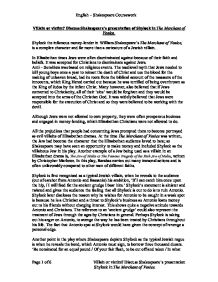 Villain or victim? Discuss Shakespeares presentation of Shylock in The Merchant of Venice.

Villain or victim? Discuss Shakespeare's presentation of Shylock in The Merchant of Venice. Shylock the infamous money-lender in William Shakespeare's The Merchant of Venice, is a complex character and far more than a caricature of a Jewish villain. In Elizabethan times Jews were often discriminated against because of their faith and beliefs. It was accepted for Christians to discriminate against Jews. Anti - Semitism was based on religious events. The medieval myth that Jews needed to kill young boys once a year to reinact the death of Christ and use the blood for the making of unleaven bread, had its roots from the biblical account of the massacre of the innocents, which King Herod carried out because he was terrified of being overthrown as the King of Judea by the infant Christ. Many however, also believed that if Jews converted to Christianity, all of their 'sins' would be forgiven and they would be accepted into the arms of the Christian God. It was widely believed that Jews were responsible for the execution of Christ and so they were believed to be working with the devil. Although Jews were not allowed to own property, they were often prosperous business and engaged in money-lending, which Elizabethan Christians were not allowed to do. All the prejudices that people had concerning Jews prompted them to become portrayed as evil villains of Elizabethan dramas. ...read more.

Lancelot says to Bassanio about Shylock, 'you have the grace of God, sir, and he hath / enough.' This shows that Lancelot also believes that only Christians have the ability to have the blessing of God and perhaps that Jews will go h**l because they are 'sinning' by being Jewish and not Christian. Salarino and Solanio, Christian friends of Antonio, don't think very highly of Shylock as Solanio says, 'Let me say 'amen' betimes, lest the devil cross my prayer, for here he comes in the likeness of a Jew.' Here Shakespeare causes the audience to think about how much hatred someone must have for another in order to call them 'the devil'. This is a horrible insult as it implies Shylock is an evil person and makes the audience feel more loathing towards him. They would agree with Solanio that only someone wicked could think of such a despicable thing as the bond Shylock has made with Antonio. The reference to 'the devil' would have been even more of an insult in Elizabethan times as h**l and the devil were taken literally in those days. They believed that 'the devil' was an active evil which was out to corrupt honest people. So for people to think of Shylock as 'the devil' is a massive insult. Not only is Solanio insulting Shylock but he is also insulting the whole Jewish community, 'here he comes in the likeness of a Jew.' ...read more.

This links in to an earlier point which I made, that in Elizabethan times where Christians actually believed that if you were anything other than a Christian you would go to h**l. So perhaps Antonio was actually trying to 'save' Shylock from h**l. Shakespeare does present Jews in a sympathetic light and proves he is not being simply r****t by the two most well known speeches in the play. I think Shakespeare uses Shylock as a Jewish villain as it was a great seller in that period of time to have a Jewish character which the Elizabethan audience loved to hate. However, Shakespeare does attempt to challenge the stereotype throughout the play as he uses Shylock's 'Hath a Jew...?' speech as a challenge to the treatment of Jews. Mostly I think Shakespeare was more interested in earning money than being r****t and anti-Semitic towards Jews. Overall, I think that Shakespeare intends to present Shylock as a villain but he also shows his human side which perhaps explains why Shylock acts the way he does. I believe that Shylock received his just desserts at the end of the play as he was prepared to kill a man just for revenge. Although Shylock was driven to this by abuse, he could have shown his human side and acted as the better man. The fact that Shylock even thought of such a bond proves he is a villain through and through. ...read more.