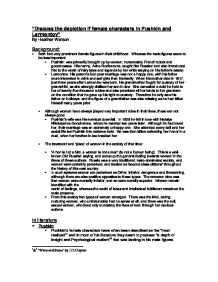 &quot;Discuss the depiction of female characters in Pushkin and Lermontov&quot;.

"Discuss the depiction if female characters in Pushkin and Lermontov" By Heather Watson Background: * Both had very prominent female figures in their childhood. Whereas the male figures seem to be less important. * Pushkin: was primarily brought up by women; nursemaids, French tutors and governesses. His nanny, Arina Rodionovna, taught him Russian and also introduced him to the world of fairy tales and legends by her while staying on his father's estate. * Lermontov: His parent's four-year marriage was not a happy one, with his father more interested in drink and serf girls than his family. When his mother died in 1817, just three years after Lermontov was born, his grandmother fought for custody of her grandchild, as she strongly disliked her son-in-law. She cancelled a debt he held to her of twenty-five thousand rubles and also promised all her lands to her grandson on the condition that he gave up his right to custody. Therefore he only saw his father on holidays, and the figure of a grandfather was also missing as he had killed himself many years prior. * Although women have always played very important roles in their lives, these are not always good. * Pushkin's wife was his eventual downfall. In 1829 he fell in love with Natalya Nikolayenva Goncharova, whom he married two years later. Although he had loved her, their marriage was an extremely unhappy one. ...read more.

He shows plain preference to the man being in charge and sees sex almost as an overpowering of the women. This may seem to some to come quite close to rape, but it is not certain it is meant like this. I feel that Pushkin sees sex as something a woman 'should' not enjoy, as it makes them impure and more like 'Helen' than 'Mary'. * Many of the main female characters in his works are more like 'Mary' than 'Helen', and they are often the most examined. When looking at "The Queen of Spades", it is clear that Lizaveta Ivanovna is a prime example of the 'Mary' character. She is submissive, shy and quite shocked when Herman shows interest in her. Her innocence is again emphasized when it becomes clear that he has only been using her. * The character of the old countess shows more of Pushkin's distrust of women. She supposedly has the secret of how to win a game of poker, but refuses to share it with anyone. When Herman confronts her she claims it was a joke, and she dies. When she comes to him as a ghost and tells him the wrong cards, we get a clear picture of how deceitful Pushkin thinks women can be. * This difference in the character's ages could also suggest something else. ...read more.

He learns of her secret meetings on the beach with the mysterious Yanko. In fear of him telling of her secret she uses the pretense of love for him to lure him into a boat where she attempts to drown him. This is very different because we are introduced to two very new concepts. One is of the male vanity. Pechorin only goes with her because he is flattered. The second is of the mysteriousness of the female nature. He sees this girl as something so completely infallible. Conclusion * Both writers seem to have picked key female characteristics for the focus of their female characters. They only really touch the surface of the 'female' and try to understand her as a one-dimensional object, when she is quite clearly not. They try to divide us into groups, and although Pushkin seems nearly able to grasp the idea of many the many faces of one woman, total enlightenment seems to escape them both. * This could be because of the views of women in general in the society of that time. They play to the typical stereotypes of women, and seem only able to see them as evil or good, strong or weak, plain or interesting, and cannot understand that they are all of these at once. * Lermontov's main problem is that he sees women as weak victims of their own emotions, and Pushkin seems to have a huge problem with women who enjoy sex. ...read more.