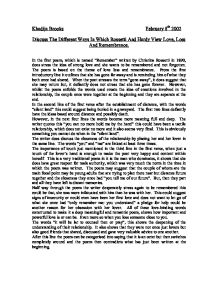 Discuss The Different Ways In Which Rossetti And Hardy View Love, Loss And Remembrance.

Khadija Brooks February 8th 2002 Discuss The Different Ways In Which Rossetti And Hardy View Love, Loss And Remembrance. In the first poem, which is named "Remember" written by Christina Rossetti in 1890, does stress the idea of strong love and she wants to be remembered and not forgotten. The poem is based on the theme of love loss and remembrance. From the first introductory line it outlines that she has gone far away and is reminding him of what they both once had shared. When the poet stresses the term "gone away", it does suggest that she may return but, it defiantly does not stress that she has gone forever. However, whilst the poem enfolds the words used create the idea of emotions involved in the relationship, the couple once were together at the beginning and they are separate at the end. In the second line of the first verse after the establishment of distance, with the words "silent land" this could suggest being buried in a graveyard. The first two lines defiantly have the ideas based around distance and possibly death. However, in the next four lines the words become more meaning full and deep. The writer quotes this "you can no more hold me by the hand" this could have been a tactile relationship, which does not exist no more and it also seems very final. ...read more.

The poet ends the poem with these last few words "you should forget and smile". It does seem that she tries to make her the most important person in the relationship now that she's gone. The poem does show positivity and has a meaning behind it which shows how strong love can be and can affect and change a person's behaviour. In the second poem called "In Death Divided" written in 1890 by Thomas Hardy straight away you know that it is about a loved one that has passed away. With Hardy's poem he writes them in away which makes them seem blunt and very straight to the point no feeling is expressed, the poem gives off this very cold and unhearten image. He tells the poem to be realistic and is not in anyway fantasised unlike Rossetti's poem. Hardy is the type of poet who is a male authority figure and much more is a man who wishes to place his lover on a pedestal and downgrade himself, but with Rossetti's poems you are more likely to be touched by her deep sincerity of everlasting love and hope. The striking but major difference is that although Hardy and his lover are still alive, it is just that his ideas that are based around the poem are similar. ...read more.

This means that although they once were together they will no longer be not even in eternity. In Rossetti's poem there is only her lover and herself, Hardy contrasts this stating that we lie in death like strangers to one another. This puts both of their lives into perspective stating that those whom still remain alive are that much engaged in "the monotonous molls of strained hard-run humanity". Yet in Rossetti's poem there is something as splendid as love and care in the relationship. But in the mind of Hardy he speaks of the " eternal tie which binds us together" Hardy then starts to show off his vast emotions, this would be know as a religious accusation, but he is an atheist this doe show contradiction in the poem. This is the same as in Rossetti's poem where she starts the poem off with pure sincerity and then contradiction comes in half way through the poem. But, both poets do describe of a close relationship once had with their lovers but with Rossetti she is desperate to be remembered, whereas Hardy stresses the distance between them both. The two poems " Remember and "In Death Divided" do share love, loss and remembrance in the relationship but in different ways. ...read more.