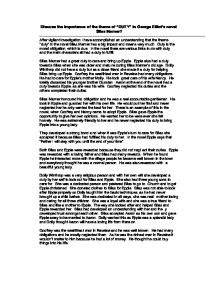 Discuss the importance of the theme of &quot;duty&quot; in George Elliot's novel Silas Marner?

Discuss the importance of the theme of "DUTY" in George Elliot's novel Silas Marner? After vigilant investigation I have accomplished an understanding that the theme "duty" in the novel Silas Marner has a big impact and means very much. Duty is the moral obligation, which is due. In the novel there are various links to do with duty and the main characters all had a duty to fulfill. Silas Marner had a great duty to care and bring up Eppie. Eppie also had a duty towards Silas when she was older and mature during Silas Marner's old age. Dolly Winthrop did not have a duty but as a close friend she made it a duty for helping Silas bring up Eppie. Godfrey the wealthiest man in Raveloe had many obligations. He had to care for Eppie's mother Molly. He took great care of his wife Nancy. He totally discarded his younger brother Dunstan. Aaron at the end of the novel had a duty towards Eppie, as she was his wife. Godfrey neglected his duties and the others completed their duties. Silas Marner honoured his obligation and he was a real accountable gentleman. ...read more.

Silas had developed an understanding with her and they developed trust amongst each other. Silas accepted Aaron as his own son and gave Eppie away to be married to Aaron. Dolly wanted this as Eppie was a splendid lady and Dolly thought Aaron will have a loving life from there on. Godfrey was the wealthiest man in Raveloe and he was well known. He had many obligations and he mostly neglected them. As he was the richest man in Raveloe it wouldn't matter to him because he had a lot of money. He thought he could buy things into his life. He had a large duty towards Eppie his daughter. He neglected her and instead Silas a more reliable and loving person adopted her. Godfrey did not have the right attitude that a father should have towards his daughter he was just self-centred, he just cares about himself. He loved Nancy but she didn't know that Godfrey had an affair with Molly a low class women and Eppie was their daughter. He was extremely frightened to lose Nancy so he let Eppie pass by and he married Nancy instead. Godfrey was selfish and un-thoughtful and I don't know why he wanted his own daughter to go to a low class person like Silas who the villagers thought very low of. ...read more.

As the house was being extended he told Eppie to personally come and choose the furniture of her choice from the Red House. Aaron had a duty towards Eppie later on in the novel. After they got married he would have to care and love her. He would also have to provide a living and he should not be like Godfrey and neglect his duty in the future. Eppie should also have a responsibility to also care for Aaron and love him. Eppie is not the type of person who will neglect her duty, as she has learnt from her stepfather Silas not her real father. In the end I have acknowledged that the people that have completed their duty and have done it well are all rewarded and the people who have neglected their duties like Godfrey have come to suffer as I have mentioned in my essay. Godfrey was very selfish and he had to pay for it because in the end he could not have what he wanted a child. Silas had every thing in the end. He had a child who made him open his eyes and after the child had entered his life, Silas opened his eyes and interacted with the villagers. I could not believe that a child like Eppie could have that much impact on a human being. Jiten Harsiani S4B ...read more.