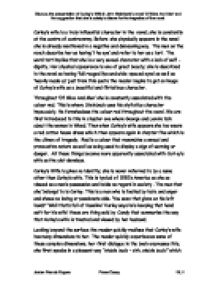 Discuss the presentation of Curleys Wife in John Steinbecks novel Of Mice And Men and the suggestion that she is solely to blame for the tragedies of the novel.

Curley's wife is a truly influential character in the novel; she is constantly at the centre of controversy. Before she physically appears in the novel she is already mentioned in a negative and demeaning way. The men on the ranch describe her as having 'the eye' and refer to her as a tart. The word tart implies that she is a very sexual character with a lack of self-dignity. Her physical appearance is one of great beauty; she is described in the novel as having 'full rouged lips and wide-spaced eyes' as well as 'heavily made up' just from this quote the reader begins to get an image of Curley's wife as a beautiful and flirtatious character. Throughout 'Of Mice And Men' she is constantly associated with the colour red. This is where Steinbeck uses his stylistics character impeccably. He foreshadows the colour red throughout the novel. We are first introduced to this in chapter one where George and Lennie talk about the woman in Weed. ...read more.

Curley's wife obviously feels passionate about her dreams and somewhat holds Curley to blame for her not achieving her dreams. Having studied 'Of Mice And Men' many conclusions can be drawn as to where lies the blame for the tragedies of the novel. These tragedies include the death of Curley's wife and Lennie as well as the breakdown of a friendship and marriage. As a result of these tragedies the dreams of Candy, George, Lennie and Curley's wife are all shattered. Curley's wife is a key character when it comes to blame. One of the largest tragedies of the novel is her own death. It comes as a result of Lennie breaking her neck after she invited him to stroke her hair. She knew how strong and powerful Lennie was as he broke her husband's hand and he told her about how he stroked the puppy to death. She clearly realises that Lennie is retarded as well as she refers to him as 'nuts'.Her provocative nature and search for attention leads people into situations that could end up fatal (as it does for both her and Lennie) ...read more.

The first time George meets Curley's Wife he calls her 'jail bait' and says 'she's gonna' make a mess. They're gonna' be a bad mess about her.' This shows that George Clearly see's that Curley's Wife will be a source of trouble but still persists at the ranch because he feels he needs the money to achieve the dream that he and Lennie have. In my opinion no one person could be held responsible for all of the tragedies, they came as a result of numerous factors. Curley's wife, Ranch life, 1930's America and many other things all contributed to the tragedies of the novel but I believe that George played the biggest part as although he is not a direct link to the tragedies he could of prevented them. He knows what Lennie is like but still lets him be in that environment. Is George a committed friend or just plain greedy? Words: 1073 ?? ?? ?? ?? Discuss the presentation of Curley's Wife in John Steinbeck's novel 'Of Mice And Men' and the suggestion that she is solely to blame for the tragedies of the novel. Jordan Francis Rogers Prose Essay 10L/1 ...read more.