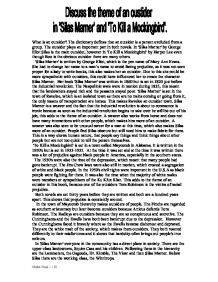 Discuss the theme of an outsider in 'Silas Marner' and 'To kill a mockingbird'.

What is an outsider? The dictionary defines that an outsider is a person excluded from a group. The outsider plays an important part in both novels. In 'Silas Marner' by George Eliot Silas is the main outsider, however in 'To Kill a Mockingbird' by Harper Lee even though Boo is the obvious outsider there are many others. 'Silas Marner' is written by George Eliot, which is the pen name of Mary Ann Evans. She had to change her name to a man's name to avoid facing prejudice, as it was not seen proper for a lady to write books, this also makes her an outsider. Due to this she could be more sympathetic with outsiders, this could have influenced her to create the character Silas Marner. Her book 'Silas Marner' was written in 1860 but is set in 1820 just before the industrial revolution. The Neapolinic wars were in motion during 1835, this meant that the landowners stayed rich and the peasants stayed poor. 'Silas Marner' is set in the town of Raveloe, which is an isolated town as there are no trains coming or going from it, the only means of transportation are horses. This makes Raveloe an outsider town. ...read more.

Lee uses naive narration, which also makes Boo Radley more of an outsider because as a child Scout finds him more fascinating and unusual than an adult would. This speculation accentuates Boo's character being an outsider. The leap of sixteen years in 'Silas Marner' shows that nothing out of the ordinary happened during the sixteen years. It also shows that Silas is no longer an outsider. The omniscient narrator in 'Silas Marner' also picks out the details that make Silas an outsider. It is also less biased and gives the reader an overview on the events that occur. Jem and Scout are outsiders when they go to Calpurnia's church and Lula says, "you ain't got no business bringin' white chillun here," Scout and Jem are outsiders because they are white and not black. They are also facing prejudice. Calpurnia is also an outsider because she can read; "Can't about four folks in first purchase read...I'm one of 'em." Not a lot of black people can but she is educated which is rare. Boo and Silas are both portrayed as outsiders. Boo is an outsider because he never comes outside which is ironic. Silas is an outsider because he is new and is a linen weaver, the sound of his loom was very different from anything the villagers were used to, and this gave them something to be suspicious about. ...read more.

It also shows that religion used to rule his life because money would go the church without any inquiries made. This is when he becomes fixated by money because he has a lot more of it that he gets to keep, " he would on no account have exchanged those coins which had become his familiars, for other coins with unknown faces," he uses the coins to compensate for his loneliness. Eliot has almost personified the coins to show that they are almost like people to him. People and maybe even children "thought fondly of the guineas...as if they had been unborn children," the coins are his family. Eliot tries to show how much of a recluse Silas is by showing the interaction between Silas and his loom; "Marner's face and figure shrank and bent themselves into a constant mechanical relation to the objects of his life." The reference to mechanical objects also shows the reader that the industrial revolution is about to commence. He is no longer human, "He seemed to weave, like a spider, from pure impulse, without reflection." He has become so dehumanised that now the simile of a spider is used, which is a lower class species than humans. ...read more.